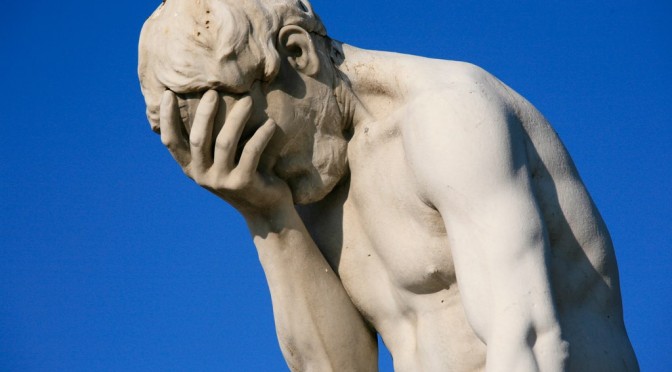 As people begin their attempts to keep ill-fated resolutions and post annoying photographs on Instagram hashtagged #newyearnewme,  it’s also time to review the terrible ramifications of your bad decisions in 2014.

Likewise, it’s time to review the year in critical theory. Here’s the news stories you may have missed.

Slavoj Zizek spent 2014 dealing with not one, but at least three plagiarism allegations.

In an incident he later apologized for, Zizek was found to have lifted text from a white supremacist magazine. Zizek claimed the text was sent to him by a friend.

Then came allegations of self-plagiarism. It’s no secret that Slavoj Zizek constantly recycles jokes, stories and analysis in his lectures and writing. But apparently,  the New York Times, an institution esteemed for its integrity and ability to succeed solely based on inertia, took issue with an op-ed written by Zizek where the author liberally copy and pasted from his book “Violence.” Zizek, in turn, didn’t see the big deal and suggested the NYT invest in a plagiarism checker which would have easily found the passage in question.

At this point, the anti-plagiarism brigade was in full force, with other plagiarism accusations coming to light. One blogger argued that Zizek plagiarized from another author in “Violence,” but the argument was more procedural than substantive.

In slightly related news, he incurred the wrath of the interweb after wrote about an interview wherein he recounts telling students at The New School University, “If you don’t give me any of your shitty papers, you get an A.”

Brian Leiter continues to be an insufferable asshole

University Chicago professor Brian Leiter allegedly defended an alleged rapist on a pedantic discussion on the definition of rape. I say “allegedly defended,” because professor Leiter is not only insufferable, he’s particularly litigious.

Leiter also announced this year that he’ll be stepping down from his post on the Philosophical Gourmet Report, an influential ranking of philosophy programs.

As it turns out, Martin Heidegger was probably a raging anti-semite

Martin Heidegger has always been a contentious case among philosophers. On one hand, he was a member of the Nazi Party who, like all Nazis, got caught up in a series of terrible activities. On the other hand, many claimed that Heidegger was simply trying to appease party officials for his career, while also trying to mitigate the more destructive elements of Nazi ideology.  And whether or not his actual philosophy is at its core Nazi-ish is also hotly debated.

With the recent release of the “Black Notebooks” in German, Heidegger’s personal scribblings provide jarring examples of his personal anti-semitism. For many others, it provides definitive proof that anti-semitism is deeply entangled with his work in “Being and Time.”

The author of ““Hegemony and Socialist Strategy” passed away after suffering from a heart attack in Seville, Spain.

The internet discovered the founder of Buzzfeed was probably a Marxist

After an older story I had written got picked up by Vox.com, the internet became infatuated with the fact that Jonah Peretti, Buzzfeed’s founder, was really into Marxist philosophy.  Peretti’s response to the issue was “lol.”

Some Christian movie starring Hercules about the Satanic influence of philosophy grossed $52 million.

Kevin Sorbo, aka Hercules, is a philosophy professor pushing thinkers like Richard Dawkins and Michel Foucault on his students before being confronted by some valiant Jesus warrior, or something.

The film, “God’s Not Dead,” was #5 in the box office for its first two weeks.

Everyone Went Apeshit Over “Capital in the 21st Century”

Until they weren’t, at least.

Thomas Piketty’s book, the title of which is a nod to Karl Marx’s “Das Kapital,” argued that economic growth among wealth-owners greatly outpaced that of workers, leading to dangerous levels of wealth disparity. Piketty’s solution, to many radicals’ disappointment, is to increase taxation on the wealthy.

It did, however, manage to become an Amazon top seller.

What stories did we miss? Let us know in the comments.