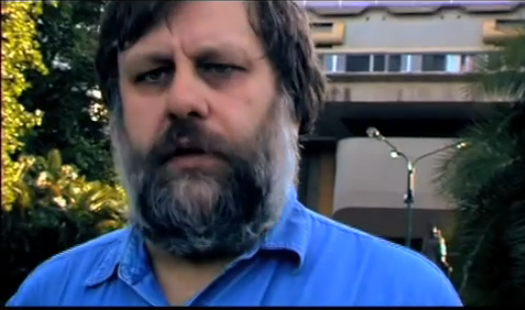 Earlier this week, yet another plagiarism allegation was brought against Slavoj Zizek. The Slovenian cultural theorist, who previously apologized for accidentally plagiarizing a white supremacist magazine and later got in trouble with the New York Times for self-plagiarism, is now accused of lifting a paragraph from Jean-Marie Muller in his book “Violence.”

The blog leveraging the accusation is “Research as a Second Language,” a blog run by Thomas Basboll, a “writing consultant” at the Department of Management, Politics and Philosophy of the Copenhagen Business School. He has a PhD in Business Economics.

Here’s the paragraph in question in “Violence”:

Desiring property and power is legitimate insofar as it enables an individual to achieve independence from others. Adversaries in a conflict, however, each have a natural tendency always to demand more. Nothing is enough for them, and they are never satisfied. They do not know how to stop themselves; they know no limits. Desire demands more, much more, than need. ‘There is always a sense of limitlessness in desire,’ [en 21] wrote the French religious thinker Simone Weil. To begin with, individuals seek power so as not to be dominated by others. But if they are not careful, they can soon find themselves overstepping the limit beyond which they are actually seeking to dominate others. Rivalry between human beings can only be surmounted when each individual puts a limit on his or her own desires. ‘Limited desires,’ notes Weil, ‘are in harmony with the world; desires that contain the infinite are not.’ [en 22]

Aside from a few missing quotations and the words “wrote the French religious thinker,” the paragraph is verbatim lifted from Jean-Marie Muller’s “Non-Violence in Education,” a document put out by UNESCO. That may seem like blatant plagiarism, but things get a little fuzzier when it’s noted that Zizek cites Muller on the previous page.

Zizek responded to the allegations in the International Journal of Zizek Studies, sending the journal’s editor Paul Taylor a full manuscript. Zizek notes, as is confirmed by Taylor, that in his original manuscript there were quotation marks that were taken out by his publisher, and the words “French religious thinker” were added by his publisher. It should also be noted that Zizek uses a single quotation/apostrophe (‘) for quotes and an “actual” quotation (“) for nested quotes. Whether this is some weird style preference, I don’t know, nor can I confidently claim it was a source of confusion for a copy editor.

“Take a look at it and you will see that this it is not the case of plagiarism. The problematic paragraph is clearly marked as a quotation (the preceding paragraph ends with : and the problematic paragraph begins and ends with ‘, a quotation mark). The date of the document (2007) shows I didn’t tamper with it later. The weird addition of “the French religious thinker” to characterize Weil was done by the publisher without my knowledge, and the quotes from Weil are simply quotes within a quote. I do not give a page number for this quoted paragraph because I quote Muller from web manuscript (to which I refer). I quote Muller more than once in this part of the book, mentioning him repeatedly. So it is definitely NOT a plagiarism from my side – and maybe, just maybe, there are more productive ways of spending one’s time than to search for plagiarisms in my work and using others for legwork.”

In a follow up response today, Thomas Basboll notes (correctly) that the UNESCO/Muller document is in fact paginated. I, however, can attest to the fact that Zizek still uses a Yahoo email address – and thus I question his basic ability to use a computer in the first place. Besides that, Basboll’s response evades almost entirely the plagiarism question and instead decides to just accuse Zizek of being a terrible thinker and writer.

I do wonder why people decide to spend their time hunting for instances of plagiarism in Zizek’s work. It’s one thing, like many have, to criticize his academic sloppiness and chime in on the plagiarism discussions. I’ll also be the first to admit that I’ve received a few good chuckles at Zizek’s expense. But the whole thing has devolved into finding the next great “gotcha” moment to debunk an academic that most people don’t take seriously anyway. Zizek is starting to become the white whale to an army of academic Ahabs.

So gross academic dishonesty? Probably not. Carelessness? Probably. What do you expect from a guy who has put out at least 3 books this year alone?