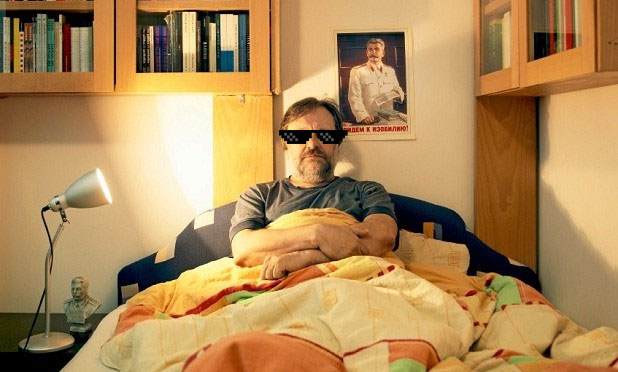 A little over a week ago, Slavoj Zizek wrote an article in the New York Times entitled “ISIS is a True Disgrace to Fundamentalism” that argued that the Islamic State of Iraq and Syria paled in comparison to the authentic fundamentalism exhibited by the Amish or Tibetan Buddhist.

It’s worth a read, even for those who generally dismiss Zizek’s work. But a few days after its publication, the New York Times quickly issued a retraction after it was discovered that chunks of the text were lifted from his 2008 book “Violence.”

After this essay was published, a reader pointed out that several sections had originally appeared, in identical or substantially similar form, in Slavoj Zizek’s 2008 book, “Violence: Six Sideways Reflections.” The New York Times does not ordinarily reprint material that has been previously published; Op-Ed contributors are asked to affirm that their work is original, and exclusive to The Times. Had The Times known that portions of the essay were copied from an earlier work, it would not have accepted the essay for publication.

Zizek was widely criticized back in July after it came to light that a 2006 article he published had plagiarized a white supremacist magazine. In that case, the plagiarism was the summation of an argument (which he only brought up to criticize), and he responded by apologizing and claimed the summary was written by a friend for use in his article.

But self-plagiarism is a lot different than actual plagiarism, in this case, and Zizek isn’t apologizing. Speaking to Newsweek, he commented:

“What’s the point of this? I simply must say I’m a little bit perplexed about the whole affair. Again, yes, I did use passages from myself but from an old book [of mine] which was a theoretical book, not from other mass media. So what’s the big deal? I don’t get it, I must say.”

And for once, I have to admit that Zizek is 100% right. Applying academic standards to mass media is ridiculous. It’s one thing to have to create new, original research in an academic setting – self-plagiarism in that sense is just lazy. It’s another to rehash the work of a book which nobody has read among a mass audience like that of the New York Times. And in this case, Zizek used his previous theoretical work in the context of a current event. And according to one blogger, it’s a frequent tactic of Zizek in popular publications.

I don’t read most of Zizek’s books, and I imagine most theorists, academics and casual readers don’t have time to read multiple 300+ tomes a year to keep up with him. I’d rather just see his occasional ramblings about fleshlights or ISIS and be done with it.

The real question raised is not Zizek’s self-plagiarism, but the New York Times complete lack of editorial oversight. Zizek even went so far to note that a simple plagiarism checker would have noticed the offending passages. “If you go online you know with all those plagiarism checkers they could have established that in 10 minutes,” he told Newsweek, “because that Violence book is available for illegal (but I don’t care) downloading online.”

The New York Times declined to comment to Newsweek, and as of September 12 the retraction has mysteriously disappeared. When asked if they had changed their stance, Zizek told us via email that they had not communicated any such change to him.