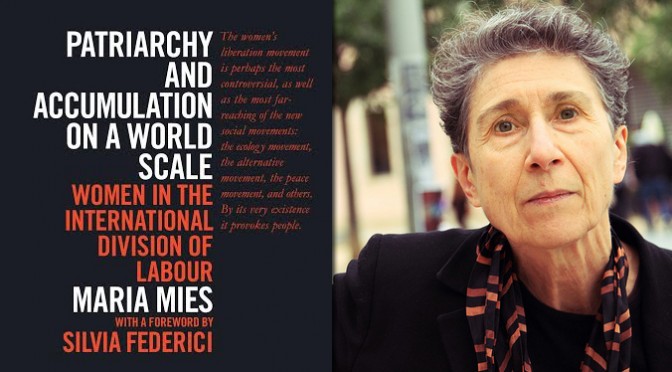 Below is the foreword to Maria Mies’ book, “Patriarchy and Accumulation on a World Scale: Women in the International Division of Labour,” written by Sylvia Federici. Published by Zed Books, it’s part of their “Critique, Influence, Change” which features works from Mies, Vandana Shiva and Samir Amin.

Foreword to Maria Mies Patriarchy and Accumulation on a World Scale: Women in the International Division of Labour (Zed Books, 2014)

There are many reasons why this new edition of Patriarchy and Accumulation on a World Scale is a welcome event. Already in the 1990s considered a classic of feminist literature and required reading for activists and scholars of the burgeoning anti-globalization movement, the book is not only as relevant today as when it was first published, but now addresses an audience even more ready to appreciate its content and methodology. Proposing a vision of world history centred on the ‘production of life’ and the struggle against its exploitation, this book speaks directly to the crisis that many are currently experiencing faced with the constant destruction of human lives and the environment, especially when the seeming inability of even powerful mass movements to bring about positive social change generates a quest for new paradigms.

Patriarchy and Accumulation recuperates, for a younger generation radicalized by the Occupy movement and the movements of the squares, the radical core of feminism, buried under years of institutional co-optation and postmodern denial of any ground of commonality among women. It recuperates the sense, so strong in the early phase of the feminist movement, that to speak of women is to touch something very fundamental in history and our everyday lives. For, as Mies puts it, women are not one particular group of human beings among others; they are those who, in every time and in every society, have produced life on this planet and on whose work, therefore, all other activities depend. Thus, tracing the origins of women’s exploitation is to ask why and where history ‘took a wrong turn’, what are the real forces by which world history has been driven, and what is the truth of the capitalist system in which we live.

This is the task Patriarchy and Accumulation takes on, and the outcome is a historical and theoretical reconstruction whose scope has often been described as ‘breathtaking’. Following the trail of centuries of male violence against women, and crossing space, time and disciplinary boundaries, it relates hunter/gatherer societies with the development of capitalism and colonialism, demonstrates the pitfalls of national liberation movements, shows the essential continuity between capitalism and socialism, all the while unearthing the material foundations of the hierarchies that have characterized the sexual division of labour and highlighting the principles by which a non-exploitative society should be governed.

There is, therefore, a great wealth of historical and political knowledge to be gained from the book. Patriarchy and Accumulation also teaches an important methodological lesson, as an excellent example of what constructing a theory requires. More important, combining the theories produced by the Wages for Housework movement, especially its identification of women’s unpaid domestic labour as the pillar of capitalist accumulation, with the third-worldist analysis of peasant economies and colonization, the book develops a theoretical framework that enables us to think together different forms of exploitation and social movements, enables us to acknowledge what divides as well as unites women, and makes of feminism a probe to grasp the main trends in the restructuring of the world economy. Inevitably, a work of such scope will pose many questions. Some may baulk at the thesis sustaining this effort: that at the beginning of history a sexual division of labour arose, whereby men specialized in the arts of violence and destruction while women specialized in the activities by which life is daily and generationally produced, and, in time, this division consolidated into a ‘patriarchal’ system in which men’s violent appropriation of women’s labour has become the dominant force of production.

This is a provocative contention, turning upside down the tales of civilization that we have been taught from the first days of school, and I imagine that a few anthropological research projects will be fuelled by the quest for evidence. But whether or not the empirical details of Mies’s theory of the origin of patriarchy can all be verified, the logical power of her argument should not be missed, as it challenges us to account for the pervasive presence of male violence against women, and confronts even the ‘gender sceptics’ with an undeniable ground of commonality in their situation. It also demystifies the presumed innovative, creative character of capitalism, ‘patriarchy’s latest manifestation’, highlighting its parasitic dependence on the free appropriation of nature and the body and work of women.

As Mies demonstrates, only with the advent of capitalism has the use of violence as an economic force been universalized and intensified beyond that exercised in any previous system. For, as she argues, the formation of a world-system has enabled capitalism to externalize exploitation, multiply its colonial divisions, and accelerate its destruction of the planet’s natural wealth. In this context, one of the most powerful parts of Patriarchy and Accumulation is its analysis of the continuity between the processes that characterized the first phase of capitalist development – witch-hunts, the slave trade, colonization – and those that have characterized the restructuring of the world economy in our time, showing that ‘development at one pole has always been underdevelopment at the other’, and that ‘primitive accumulation’ cannot be confined to the origins of capitalist society, for it has been an essential aspect of every phase of capitalist development and has now become a permanent process.

This is a ‘truth’ that social and political developments since the first publication of Patriarchy and Accumulation have verified time and time again. So has the book’s assertion of a direct causal connection between the global extension of capitalist relations and the escalation of violence against women, as the punishment against their resistance to the appropriation of their bodies and labour. Not only are thousands of women, as well as many young men, continuing to be enslaved and to die in ‘free export zones’, the workhouses of our time. Violence against women has so much increased in recent years that the term ‘femicide’ is now commonly used even in government reports; in Italy, in 2013, ‘femicide’ was introduced as a crime in the legal code. Meanwhile, across the world we have witnessed a resurgence of witch-hunts. It is to Mies’s credit that in describing the destructive forces that ‘patriarchal capitalism’ has unleashed, she does not soften her critique, nor offers quick solutions, but instead validates the growing realization that capitalism cannot be reformed. Patriarchy and Accumulation, however, is also an indictment of Marxism. Like Mariarosa Dalla Costa and other Wages for Housework activists and political theorists, Mies criticizes Marx’s reductive concept of work, and goes even further in her rejection of the terminology Marx developed – arguing, for instance, that such concepts as ‘productivity’ and ‘surplus labour’, in Marx’s interpretation, contribute to the mystification of what constitutes production.

This at present is easily granted, even by many Marxists, theoretically at least, as decades of feminist writing and campaigning have removed any doubt that producing human beings is work, and work that capitalism depends upon. More controversial, but especially important in the present social context, where the hold of technology on our lives has never being as strong, is Mies’s rejection of the Marxian dream of a fully industrialized society, in which machines perform all the work, as a condition for human liberation. As she powerfully argues, such a dream ignores the fact that it is not work as such that is oppressive, but the social relations of exploitation that sustain it. This is a crucial message for the many among us who, despite the growing refusal of capitalist society, are still enthralled by its technological production, often assuming that their powers have been acquired through Facebook or Twitter. For them, and indeed for all of us, Patriarchy and Accumulation is a necessary political guide. It does not allow us to forget at what cost the new technologies are produced, what violence they unleash, and how destructive the generalization of capitalist technologies would be for the productive powers of the earth. Here, too, history is on the side of Mies’s analysis – in the post- Fukushima world the Marxian dream of a continuous industrialization has become humanity’s nightmare. More than that, people’s response to the present capitalist crisis has vindicated Mies’s view that the real revolutionary subjects are not the computer programmers and other agents of mechanization, but the millions of women who on less than ‘a dollar a day’ have struggled to keep their communities alive, mostly through their subsistence work and the creation of more cooperative forms of social reproduction. It is their implicit presence, and the presence of the many who daily struggle to create forms of existence and social relations not governed by the logic of capitalist accumulation, that give power to Mies’s work.

This is why, despite its uncompromising portrayal of the destructive powers of capitalism, Patriarchy and Accumulation does not encourage any form of historical pessimism, confident that capitalism so deeply threatens the reproduction of our life that our revolt against it cannot be tamed, but will resurface again and again on humanity’s agenda until it has been ended.