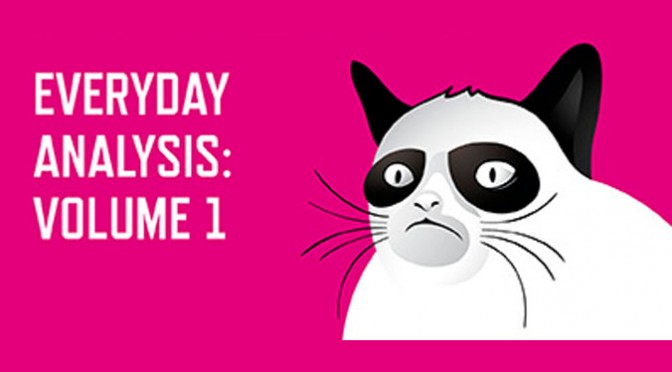 “Death Drive,” “hauntology,”  “in horror vacui,” and “uber-chutzpa” are just a few of the phrases that grace the pages of “Why are Animals Funny? Everday Analysis: Volume 1,” published in the UK by independent publisher, Zero Books. “Why are Animals Funny?” is written by a band of, well, what I call renegades. They, however, call themselves the Everyday Analysis Collective (EDA Collective), a group comprised mostly of journalists and academics out of England.

The book is a compilation of forty-six articles that move flawlessly from the particular to the universal, and only one of which is actually about why animals are funny, and let’s be real – they are hilarious, but not for the reasons you’d expect. The EDA Collective brings in heavy hitters like G.W.F. Hegel and Georges Bataille to show us what’s really going on with the cat video and Corgi beach party obsession. I’ll say that my “animal drives” will no longer be suppressed after that article.

A note on the title (ironically, probably intentionally), the second article in the book is called, “On the Impossiblity of Judging a Book by its Cover.” The cover is a loud hottish-pink color, hideous, with what I can only describe as an existentially terrified cat on the front. This is probably what I looked like while I purposefully read the book in various public settings: in a park, on the train (note: to get the full effect of “Cross country trains: How can we measure ideology today”, it is best read on a crowded train), at Starbucks, in public toilets, but little did the passersby know, I was actually reading about, “Why Justin Bieber Should Listen to Neutral Milk Hotel,” and, “Symbols of the Working Class: The Call Centre and Alienating Advertising.”

If you haven’t figured it out by now, the EDA Collective analyzes phenomena that have become culturally banalized, at an intersection where the absurd and strange become intimate, and the reader is left with no choice but to put his or her’s everyday existence into question. Their critiques, averaging two pages each, magnify to an unsightly degree the linguistic, social, and cultural constructions we live in, how this reality functions onto us, and then ends each article with an always all too human provocation. That is their method. It is sharp and it penetrates. If you’re at all familiar with Slavoj Zizek and have seen his films, “The Perverts Guide to Ideology,” or “The Perverts Guide to Cinema,” you’ll appreciate and respect the work the EDA Collective has done in just one hundred short pages. And unlike Zizek, there are very few: “as-such’s,” “precisely’s,” “and-so-on’s.” The Collective means exactly what they say and say exactly what they mean. Each of the 46 articles can stand alone in this way.

On that same note, everything about “Why are Animals Funny?” is contra to contemporary academia. That is it’s charm. And what I mean by this, is that the hot-pink cover with a cat on it, the short articles, and the hilarious quips, will not be found anywhere in the buttoned-up, stuffy University air of today. Even if the reader is unfamiliar with Marxist attack on ideology, Lacan’s tripartite model of the mind, and Baudrillard’s definition of hyperreality, you can enjoy what these writers have set out to do, which is force readers to put down the book and question the nature and construction of their reality in that particular, atomized moment. It is best read on the train, at Starbucks, or in a crowded park. You will get the full empirical experience of the theory this way. The articles will come to life in a Frankensteinian-way, and whether that is frightening or hilarious is, I guess up to you.

I think it  was Wittgenstein who said that the only way to confront something truly awful is through humor. “Why are Animals Funny?” is itself funny, but please note, this is a serious book, and the jokes it makes are to be taken seriously.

It’s theory is concrete. For instance, in “One Grande Super Skinny Latte with an Extra Shot and Sugar Free Vanilla Syrup Please!”

“I recognize the cultural need to consume American-style coffee, placing the mind in the position of the subject-who-desires, and I instead need to gratify this cultural or social desire without contaminating the purity of my body; the body is in on it, the mind is fooled (75).”

It is obvious the American style coffee referenced above is Starbucks. Anybody who hasn’t had their head buried in sand for the past decade has seen someone order this exact drink–probably in a pair of Lululemon pants, eats gluten free, and pays on his or her cell phone–and maybe your response is to scoff, laugh, or order that exact same drink right afterwards, totally un-phased. Moments like these that go that unquestioned everyday are thrown under the microscope, and everything becomes implicated in a massive web. Language, culture, sociostructures, the body, the mind, and most importantly, you,  just another fly stuck on the web, reading this review on the internet, are implicated, yes, whether you like it or not you are in on it.

The EDA Collective’s mission is simply stated in the introduction to the book. They want to make us think, and constantly re-think our reality, a reality that is full of impossible complexities: skinny latte’s, Toasties[1], anxiety in children’s novels, and The Flaming Lips. To this end, their goal, as simple as it is, is hard to achieve. But they do achieve it. I think these renegades attack this challenge in the best possible way, and that is from the multi-vantage point that only a collective can offer, a panoramic view of different voices, that see different signs, objects, and symbols, and amalgamate them together in a creative register, that makes for a delightful and engaging read.

[1] This was one of the more opaque objects alluded to that I came across while reading. I had no idea what in the hell a Toastie was, beyond being a a boring grilled cheese. One of the Collective’s editors cleared this up for me, “The best ones are made in a kind of machine which cooks the bread and sort of seals it together. I haven’t had one for about 10 years, but I want one now. I guess the best way to describe it is – its a kind of shit Panini.”