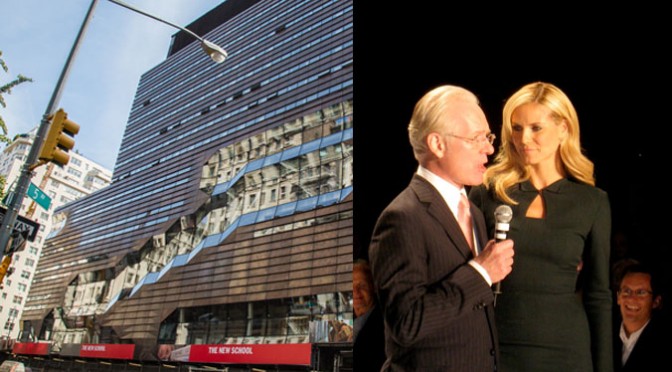 Yesterday, news broke on the New York Post that The New School may be renamed after its design and fashion division, Parsons. That story appears to be unfounded, according to multiple sources at The New School.

The New School has long been a bastion of radical philosophy. Though founded in 1917 as the New School for Social Research by notable scholars including John Dewey and Thorstein Veblen, the school’s “second founding” happened in 1933 after exiled German academics started their own division entitled “The University in Exile.” Noted scholars associated with the program included Leo Strauss and Hannah Arendt, who have left a strong legacy in the school’s graduate programs.

Parsons, The New School’s design school, was acquired by The New School in the 1970s. It has since run one of the world’s leading fashion programs, and was formerly used in the popular show “Project Runway” with its dean, Tim Gunn. The program has proved to be a cash cow for the school, often causing tension with students from the other, more radical, divisions in The New School.

So when the New York Post reported that The New School was considering a name change to “Parsons University,” it inevitably drew the ire of many students and alums.

High-level officials at the Greenwich Village university are in talks to rename the entire institution Parsons, the biggest money-maker among the eight colleges that make up The New School.

…The administrators involved, including the president, trustees and some faculty, haven’t made any decisions yet, said Sam Biederman, a spokesman for The New School.

The talks are in “very early stages,” he said.

Trustees have informally batted around the idea of renaming the whole school as Parsons since at least the last decade, said Bob Kerrey, the former Nebraska senator and ex-president of the school.

But that story is largely untrue. We called Sam Biederman, the director of communications at The New School, who said the story was totally unfounded. Though quoted in the story, he had “no idea” who started the Parsons University rumor and said the NY Post was unwilling to divulge their source. He also directed us to an official New School press release debunking the claim. “That name change is not under consideration,” it reads.

“I suspect the rather lazily reported NY Post story is just retailing some gossip dropped by someone on our board,” New School professor McKenzie Wark told us.

Biederman did confirm that The New School was exploring how to best “express who we are.” That rebranding process is still in its infant stages, and Biederman said it was too early to tell where it would go.

Wark seemed to welcome a branding change in The New School, noting the “need to re-imagine what ‘The New School for Social Research’ could mean in the 21st century.”

“The new initiative in Capitalism Studies would I think be a good example of a ‘new’ New School,” Wark continued, “but let’s not stop there.”