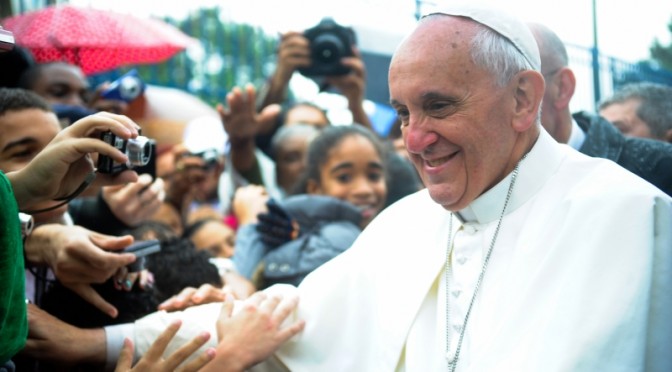 I have mainly ignored the goings-on of the Catholic Church, as I felt it safe to assume those goings-on were pederasty, homophobia and misogyny. And when this Pope Francis fellow, of which I knew nothing about, decided that the gays weren’t agents of Satan, I wasn’t any more excited than I normally am when a shit-tastic organization decides to be slightly less shitty.

But, does Pope Francis’ strong anti-capitalist message mean I should get on board the pope mobile?

Francis recently released a “Apostolic exhortation,” which I will assume for all intents and purposes means “pope manifesto.”

In chapter 2 of the nearly 300 page document, Francis deems it necessary to investigate the world we live in. The sub-sections are named thus:

Gawker even published their 11 favorite anti-capitalist lines, such as

Human beings are themselves considered consumer goods to be used and then discarded. We have created a ‘disposable’ culture which is now spreading. It is no longer simply about exploitation and oppression, but something new.

In this system, which tends to devour everything which stands in the way of increased profits, whatever is fragile, like the environment, is defenseless before the interests of a deified market, which become the only rule.

See the full list at Gawker, or the full manifesto here.

So should we stop hating the Papacy? You decide internet!