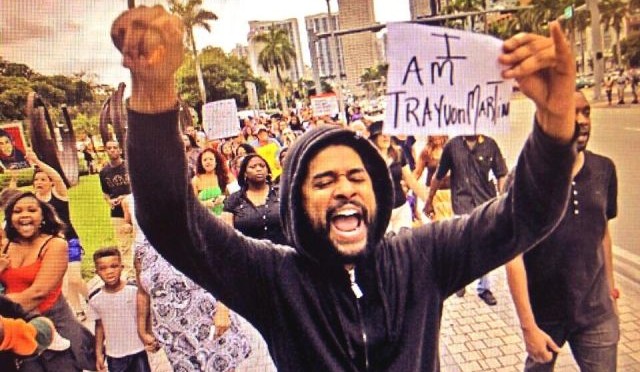 As I am sure that you have heard, on Saturday, July 13th, George Zimmerman, the man accused of murdering teenager Trayvon Martin, was found ‘not guilty’ of either murder or manslaughter. Naturally, the verdict was extremely controversial. Everyone from Stevie Wonder to Jimmy Carter have grabbed their slice of the publicity pie by weighing in on the matter. And, more importantly, both cheers and tears were heard depending on what side of the racial divide one happens to hold allegiance to.

Among the splashing frenzy of the of news-media sharks feeding on their favorite word (‘controversial’), what caught my attention was a quote by race, gender, and economic theorist, bell hooks, which has been circulating around twitter and other social media sites since the verdict:

White supremacy has taught him that all people of color are threats irrespective of their behavior. Capitalism has taught him that, at all costs, his property can and must be protected. Patriarchy has taught him that his masculinity has to be proved by the willingness to conquer fear through aggression; that it would be unmanly to ask questions before taking action. Mass media then brings us the news of this in a newspeak manner that sounds almost jocular and celebratory, as though no tragedy has happened, as though the sacrifice of a young life was necessary to uphold property values and white patriarchal honor. Viewers are encouraged to feel sympathy for the white male home owner who made a mistake. The fact that this mistake led to the violent death of an innocent young man does not register; the narrative is worded in a manner that encourages viewers to identify with the one who made the mistake by doing what we are led to feel we might all do to “protect our property at all costs from any sense of perceived threat.” This is what the worship of death looks like.

It was one of the most shared items to date on the Critical-Theory Facebook.

The quote is from hooks’ 2001 book, “All About Love: New Visions

,” but is so appropriate that some commentators have thought that the quote was a direct response from hooks regarding the Zimmerman verdict.

While this isn’t the case, the right-on-ness of the quote is hard to deny. As is her modus operandi, hooks interconnects most of the major “structures of oppression” (save, arguably, the structural oppressions of sexuality, species, and handicap) which, written in (not so short) shorthand, can be referred to as the “Imperialist White Supremacist Capitalist Patriarchy.” Really, the only thing that the above quote is missing is the imperialist bit which can kind of be assumed by the fact that hooks is talking about the ‘mass [news] media’ which (as Derrida has said) is “spontaneously ethnocentric” (Echographies of Television, 2002); ethnocentrism being a really important part of legitimizing imperialism (think of the ethnocentric rhetoric of the British Empire in ‘civilizing’ the ‘savages’ or the more modern-day rhetoric of America bringing ‘democracy’ to the ‘third world’).

Now, to set right-on-ness aside for a moment, what seems all the more interesting to me, is the fact that hooks’ words have been used for individuals to gain clarity and insight into the confusion that all of the “controversy” of this case has caused. Whether the quote is right or wrong, what I see through the sharing of this quote is something like a great social catharsis for the anger and sadness that both the details of this case and the public outcry both for and against Zimmerman have caused. Perhaps, as some post-Marxists might think (thinking here of Guy Debord), this catharsis would be better understood as a diminishing of the people’s “revolutionary spirit and anger.” And, maybe, to some extent, they are right. After all, hitting “share” on Facebook is a lot easier than taking to the streets (which was the subject of this Jodi Dean debate). But, I tend to agree with Zizek (which really only happens every once in a while) that “We feel free because we lack the very language to articulate our unfreedom” (Welcome to the Desert of the Real, 2002).

The Trayvon Martin/ George Zimmerman case has brought attention to some major structures of oppression at work. And hooks’ words, as far as I am concerned, have been taken up by a confused and distressed few in order to “articulate our unfreedom,” an unfreedom which exists regardless of whether Zimmerman was truly guilty or not.