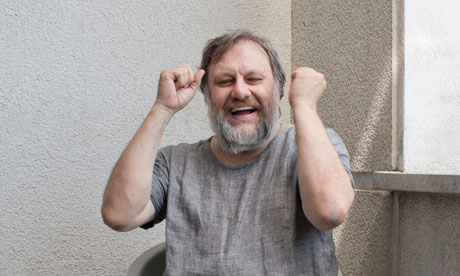 Since February, we’ve been covering the fallout of an interview Chomsky gave wherein he called Jacques Lacan and Slavoj Zizek “charlatans.” Chomsky has recently, and in the past, berated critical theorists for being unable to offer empirically tested theories in plain language.

Chomsky noted  in his interview “Zizek is an extreme example, I don’t see anything in what he’s saying,” and continued to attack any theory that couldn’t be explained to a 12-year-old in five minutes. This is a surprising criticism to level against a man who makes a point of using toilets and Kung Fu Panda to explain his work, literally the only thing 12-year-olds care about. In a talk at Birkbeck College in London, Zizek responds to the charges leveled against him by Chomsky.

Chomsky, as we have noted, sort of sets Foucault aside, whom he claimed was intelligible when you sat him down and spoke with him. Still, Chomsky notes “I know that Foucault’s scholarship is just not trustworthy here, so I don’t trust it, without independent investigation,” which makes Zizek’s response to Chomsky all the better.

Open Culture came upon this audio from an event in London, where Zizek attacks Chomsky for stressing empirics. “I don’t think I know a guy who was so often empirically wrong!” Zizek continues:

Let’s look… I remember when he defended this demonisation of Khmer Rouge. And he wrote a couple of texts claiming: “no this is western propaganda. Khmer Rouge are not as horrible as that.” And when later he was compelled to admit that Khmer Rouge were not the nicest guys in the universe and so on, his defence was quite shocking for me. It was that “no, with the data that we had at that point, I was right. At that point we didn’t yet know enough, so… you know” but I totally reject this line of reasoning.

You can listen to the whole event here, but we’ve clipped out the relevant portion and uploaded to YouTube below.

The comments are in regards to Chomsky’s alleged support of the Khmer Rouge in Cambodia. That article refers to a piece you can read at Chomsky.info, in which Chomsky discusses his thoughts on Cambodia.

Also of note, Zizek notes that a friend of his in the United States didn’t get a job because Zizek wrote him a letter of recommendation.

Hear everything in the embedded clip below.

Below is a transcript via the EsJayBe blog.

What is that about, again, the academy and Chomsky and so on? Well with all deep respect that I do have for Chomsky, my first point is that Chomsky who always emphasises how one has to be empirical, accurate, not just some crazy Lacanian speculations and so on… well I don’t think I know a guy who was so often empirically wrong in his descriptions in his whatever! Let’s look… I remember when he defended this demonisation of Khmer Rouge. And he wrote a couple of texts claiming: “no this is western propaganda. Khmer Rouge are not as horrible as that.” And when later he was compelled to admit that Khmer Rouge were not the nicest guys in the universe and so on, his defence was quite shocking for me. It was that “no, with the data that we had at that point, I was right. At that point we didn’t yet know enough, so… you know” but I totally reject this line of reasoning.

For example, concerning Stalinism. The point is not that you have to know, you have to photo evidence of gulag or whatever. My god you just have to listen to the public discourse of Stalinism, of Khmer Rouge, to get it that something terrifyingly pathological is going on there. For example, Khmer Rouge: even if we have no data about their prisons and so on, isn’t it in a perverse way almost fascinating to have a regime which in the first two years (’75 to ’77) behaved towards itself, treated itself, as illegal. You know the regime was nameless. It was called ‘alka’ [?] an organisation – not communist party of Cambodia – an organisation. Leaders were nameless. If you ask ‘who is my leader?’ your head was chopped off immediately and so on.

Ok, next point about Chomsky, you know the consequence of this attitude of his empirical and so on – and that’s my basic difference with him – and precisely Corey Robinson and some other people talking with him recently confirmed this to me. His idea is today that cynicism of those in power is so open that we dont need any critique of ideology, you reach automatically between the lines, everything is cynically openly admitted, we just have to bring out the facts of people. Like ‘this company is profiting in Iraq’ and so on and so on. Here I violently disagree.

First, more than ever today, our daily life is ideology. How can you doubt ideology when recently I think Paul Krugman published a relatively good text where he demonstrated how this idea of austerity: this is not even good bourgeois economic theory! Its a kind of a primordial, common sense magical thinking when you confront a crisis “oh, we must have done something wrong, we spent too much so lets economise and so on and so on.”

My second point, cynicists are those who are most prone to fall in to illusions. Cynicists are not people who see things the way they really are and so on. Think about 2008 and the ongoing financial crisis, it was not cooked up in some crazy welfare state; social democrats who are spending too much. The crisis exploded because of activity of those other cynicists who precisely thought “screw human rights, screw dignity, all that matters is… and so on and so on”

So as to this ‘problem’ of are we studying the facts enough I claim emphatically more than ever ‘no’ today. And as to popularity, I get a little bit annoyed with this idea that we with our deep sophisms are really hegemonic in humanities. Are people crazy? I mean we are always marginal. No, what is for me real academic hegemony: its brutal, who can get academic posts? Who can get grants, foundations, as so on? We are totally marginalised here. I mean look at my position… “oh yeah you are a mega-star in United States” well I would like to be because I would like power to brutally use it! But I am far from that. I react so like this because a couple of days ago I got a letter from a friend in United States for whom I wrote a letter of recommendation, and he told me “I didn’t get the job, not in spite of your letter but because of your letter!” He had a spy in the committee and this spy told him “you almost got it, but then somebody says ‘oh, if Zizek recommends him it must be something terribly wrong with him’”

So I claim that all these ‘how popular we are’ is really a mask of… remember the large majority of academia are these grey either cognitivists or historians blah blah… and you don’t see them but they are the power. They are the power.

On the other hand, why are they in power worried? Because you know… don’t exaggerate this leftist paranoia idea that “we can all be recuperated” and so on and so on. No! I still quite naively believe in the efficiency of theoretical thinking. Its not as simple as to recuperate everything in. But you know there are different strategies of how to contain us, I must say that I maybe am not innocent in this, because people like to say about me “oh, go and listen to him, he is an amusing clown blah blah blah” This is another way to say “dont take it seriously”.

But this is one of the strategies. You know there are so many strategies to counteract and the proof that we are not so impotent as innocent is how, did you notice how – against you now [Douzinas] and against me – this old line of “oh these are crazy half-clownish marginals” imperceptibly is more and more combined with the opposite line “we are dangerous. we advocate violence. we are preparing a new holocaust or whatever”. This is deeply symptomatic, this mixture of ‘we are powerless, innocent clowns’ to ‘these guys are really dangerous preparing a new terror’ and so on. Of course, my heart is with the second position, but that’s another story…