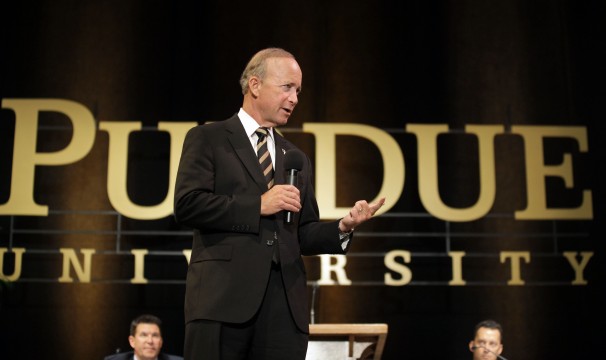 Mitch Daniels is an asshole, and he’s been an asshole for a while. As governor of Indiana in 2005, he successfully implemented one of the first voter ID programs that would be a model for disenfranchising black folks everywhere.

Now, someone decide to make Daniels the dean of Purdue University. Because, you know, hiring former politicians with no experience in academia has never gone horribly wrong. What’s really interesting is that a man who is running an institution predicated on free thought once tried to go Fahrenheit 451 as Indiana’s governor by banning books that were “anti-American.” The target? Howard Zinn’s “A People’s History of the United States.”

As the HuffPo reports:

Emails obtained by The Associated Press through a Freedom of Information Act request show Daniels requested that historian and anti-war activist Howard Zinn’s writings be banned from classrooms and asked for a “cleanup” of college courses. In another exchange, the Republican talks about cutting funding for a program run by a local university professor who was one of his sharpest critics.

According to Daniels, Zinn’s book “is a truly execrable, anti-factual piece of disinformation that misstates American history on every page.”

Daniels, since becoming president at Purdue, has criticized policies that limit free speech. What he must have meant is “I’d like more classes teaching conservative propaganda, please.”

He [Daniels] hosted a lecture that included AAUP members on speech suppression at universities nationwide, and he sent an “open letter” to the Purdue community in January saying universities have squashed free speech rather than encourage it.

It’s not the first time that a governor has taken an interest in radical professors. Back in the 1960s, there was a strong movement to get Herbert Marcuse fired from UC San Diego. Then-governor Ronald Reagan even got involved, and the whole affair is talked about in depth in the documentary Herbert’s Hippopotamus.

Read the full article about Mitch Daniels from the Huffington Post.