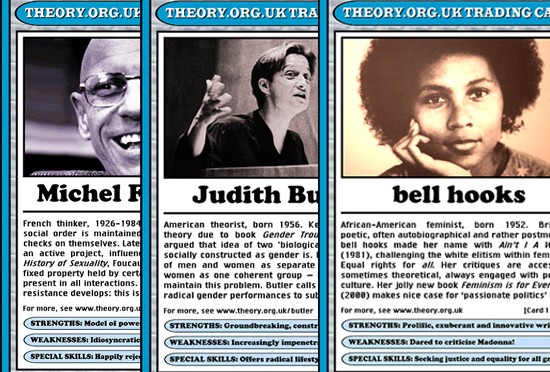 Guy Debord once argued that spectacle emerges when “having” triumphs over “being”, from which the triumph of “appearing” (i.e. spectacle)” is the only logical conclusion. So what better way to consummate the spectacle’s victory than by owning your own critical theory trading cards?

*Full disclosure: I think the Pokemon trading card game was the greatest thing ever invented and I secretly love this.

These trading cards are nothing new. They’re an offshoot of some folks over at theory.org.uk, a site that offers resources for aspiring cultural theorists. The cards were the brainchild of David Gauntlett in 2001 and were the subject of a 2004 New York Times article.Soon after, tons of knock-offs were being created by fans. The trading card site lists some of them as “unofficial” cards.

While there was a limited-edition printing for sale on Amazon, all the cards are available in high-quality format so you can print out your own freely. All kidding aside, these would probably make a good study aid.

Gauntlett is a professor of Media and Communications at the University of Westminster. You can check out some of the books he’s published here