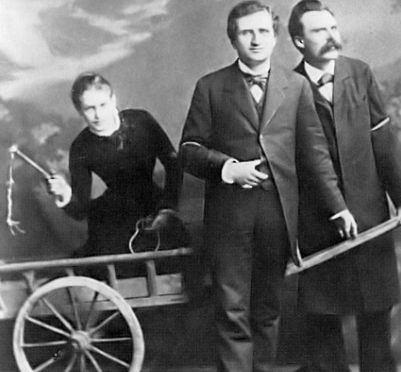 Friedrich Nietzsche was a German philosopher who really hated Christianity and morality. His philosophy has often erroneously been conflated with Nazism because his sister was kind of a Nazi who wanted to revive her brother’s work after his death. By revive, I mean grossly manipulate to make it seem anti-semitic and Nazi-ish because, hey, when in Rome, right?

#1 Nietzsche was a failure during his lifetime

Nietzsche had the impressive feat of becoming a professor by the age of 24. However, he was alienated by his peers and forced to retire by the age of 35. Nietzsche also wanted abandon philosophy in favor of gardening, but apparently failed at that as well. It wasn’t until after his death that Nietzche’s work began to be read widely.

Botton claims that Nietzsche was grotesquely incompetent at romance. Apparently, Nietzsche’s epic hipster mustache “scared” women at the time. And that’s probably for the better, because Nietzsche also managed to contract syphilis at a brothel while he was still in college.

#3 He was sickly for most of his life

You would think a philosopher who argued for the embrace of suffering and the triumph of the over-man must be the philosophical equivalent of Chuck Norris. But it turns out, Nietzche’s philosophy is seemingly ironic when you find out he was always constantly ill and not very ubermenschy. Part of this was due, of course, to that syphilis he caught earlier. Given the Darwinian interpretation that some give to Nietzsche’s work (which many argue is wrong), this becomes a little hilarious. It would almost be as ironic as discovering conservative god-figure Ayn Rand was on government handouts. Oh wait, she was.

Of course, Botton points out that Nietzsche’s philosophy is all the more fitting for his life. For a man who suffered a lot, he learned to celebrate it.

After seeing a horse being whipped in the streets of Turin, Italy, Nietzsche had a mental breakdown that put him in an asylum for the rest of his life.  Nietzsche is reported to have run over to the horse and held it in his arm to protect it before he collapsed to the ground. The scene was also the subject a movie by Bela Tarr (whom Jacques Ranciere wrote a book

about) called The Turin Horse.

According to Botton, after the horse incident Nietzsche “returned to his boarding house, danced naked” and thought of shooting the Kaiser. Botton continues to explain that Nietzsche began to believe himself to be Jesus, Napoleon, Buddha and other historical figures. Nietzsche’s family threw him into asylum where he died 11 years later at the age of 56.

#5 He thought alcohol was as bad as Christianity

Nietzsche lumped alcohol and Christianity in the category of “shit that makes you not embrace suffering.” Nietzsche, according to Botton, doesn’t think we should “drown our sorrows”. As such, he never drank. Nietzsche, according to Botton, believed that Christianity like alcohol, “dulls pain” but also “weakens resolve to overcome the problem from which the pain has arisen.”  And if you thought that might piss off the Church, it did.  After his death, Nietzsche’s burial records written by church authorities note he was “a known antichrist” next to his name”