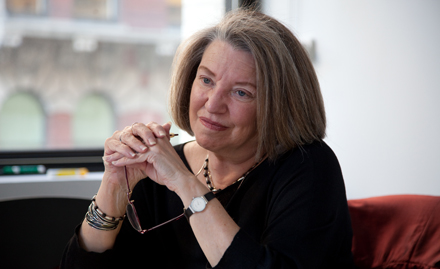 which argued that the history of capitalism was a double-movement between “marketization” and “social protection.” Polanyi argues that market principles are embedded in social institutions which limit and define its scope, but are often torn apart by market forces. Capitalism and the state are constantly playing a balancing game. When the rise of industrial capitalism makes cultural institutions vanish into the air and creates the rise of slums, child labor and pollution, the state steps in to correct its excesses.

After the failures of the welfare state in the 1970s, figures like Ronald Reagan came to prominence preaching the importance of unfettered markets. And then those unfettered markets caused a massive increase in inequality and a stagnation of the middle class. Those excesses of Reaganomics should have met a re-entrenchment of social protection from the state. But they didn’t.

That’s where Nancy Fraser’s latest article in the new issue of the New Left Review steps in. Fraser argues that the “double-movement” of Polanyi is no longer an adequate framework to think from, and instead posits a “triple-movement” of marketization, social protection, and emancipation.

The labor movement, a strong force in the push for social protections, has disintegrated under a new mode of production that increasingly relies on investment portfolios and technology in place of factory workers. Furthermore, the rise of a global class of unemployed and underemployed has created a jealously of union workers who are believed to receive an undeserved level of financial security. This jealously has gutted public support for union workers, as seen in the demonization of school teachers and Mitt Romney’s famous jab at firefighters, teachers, and police.

But we shouldn’t reckon for the good ol’ days of social protection and labor unions. As political activists in the last 50 years have realized, social protection is often a guise to re-entrench the status quo. After all, public housing can provide a social safety net as much as it can provide discreet zones of surveillance and discipline for people of color. Laws that protect women can easily re-affirm patriarchal values. Fraser notes:

Feminists revealed the oppressive character of protections premised on the ‘family wage’ and on androcentric views of ‘work’ and ‘contribution’, showing that what was protected was less ‘society’ per se than male domination. LGBT activists unmasked the invidious character of public provision premised on restrictive, hetero-normative definitions of family. Disability-rights activists exposed the exclusionary character of built environments that encoded able-ist views of mobility and ability. Multiculturalists disclosed the oppressive character of social protections premised on majority religious or ethnocultural self-understandings, which penalize members of minority groups. And on and on.

And that’s where Fraser notes a third category that is separate from marketization and social protection: emancipation. Emancipation is neither aligned with social protection nor marketization. It confronts domination at either pole. Even marketization can disrupt older social institutions that are oppressive. For example, the inclusion of women in the workplace eroded patriarchal conceptions of family and was also conducive to capital’s drive to exploit labor.

Fraser’s goal is to formulate a triple movement that fights against domination and the dangerous partnership between neoliberalism and emancipation. She concludes:

Finally, the triple movement suggests a political project for those of us who remain committed to emancipation. We might resolve to break off our dangerous liaison with neoliberalism and forge a principled new alliance with social protection. In thereby realigning the poles of the triple movement, we could integrate our longstanding interest in non-domination with the equally valid interest in solidarity and social security. At the same time, we could reclaim the indispensable interest in negative liberty from the neoliberal uses to which it has been bent. Embracing a broader understanding of social justice, such a project would serve at once to honour Polanyi’s insights and remedy his blind spots.

Nancy Fraser is a professor of politics at The New School University/New School for Social Research. Her latest book is Fortunes of Feminism: From State-Managed Capitalism to Neoliberal Crisis

You can read the full article in the June issue of the New Left Review (it’s free!). For those who hate reading, you can watch a similar lecture Fraser gave at the University of Cambridge here.