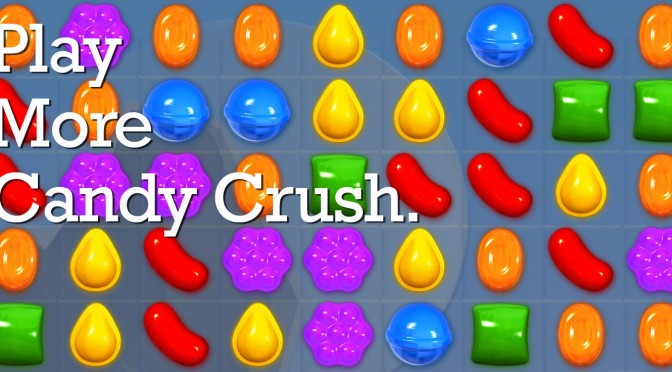 I am about to incriminate myself to a rather high degree while I engage with a specific portion of Alfie Bown’s new book, “Enjoying It, Candy Crush and Capitalism.” But screw it.

From Monday through Friday I’m a humble research assistant between the hours of 9 a.m. to 3 p.m. I have my own office and my own computer, which faces the wall, which faces the door. In effect, no one can see what I do on my computer. No I don’t watch porn at work. Rather, I expertly switch up my screen the moment someone walks into my office. Facebook, Twitter, a Buzzfeed quiz and a hundred op-ed’s I don’t give a crap about but nonetheless enjoy reading, will be swapped in less than one second for an SPSS database or a peer-reviewed article I’m allegedly citing. This techno-acrobatic trickery is my constant state of distraction.

Bown’s argument as to why this constant state of distraction is of vital importance to my work life was so uncanny I had to put the book down and wonder if he had hacked my workplace computer, and subsequently my brain, because after all, in the 21st century the two are one in the same. The analysis goes as follows:

Before diving into two case studies that comprise the book’s second chapter ‘Unproductive enjoyment: A culture of distraction,’ Bown poses the alarming argument:

“It is of political importance to realize that this enjoyment is anything but unproductive and should be seen as a particularly productive form of modern day subjectivity… The regular enjoyment of ‘distracting’ and ‘unproductive’ entertainment is a vital part of determining our relationship to ‘work.’”

What else could a BuzzFeed quiz or a game of Candy Crush Saga be beside an idiotic, consumptive, time sucking vacuum? In the context of the workplace, it’s everything, Bown says. The distractions with which we engage amidst the work we do are laden with value-judgements. On the one hand we call our work duties “important” and “real,” while on the other we call the games and psychopathy quizzes unproductive distractions. However, the unproductive distractions are, in fact, much more than only that.

“The distraction supplements that mundane but supposed-to-be serious reality from which we secretly want to be distracted, allowing us to feel what we ‘should’ be doing (usually working) is truly ‘worthwhile.’”

That I distract myself constantly, according to Bown’s text above, is so the work I have to do eventually becomes meaningful and worthy enough to do in the first place. This is more than mere procrastination. The longer I put it off the more pressure builds, the more I feel like there is something relevant I need to accomplish. I’ll begin truly working when I know I’ll soon need to turn a product, perhaps a results and discussion section to be sent off to another grad student or project director for review. I can only imagine the person editing is also distracting themselves while they edit the work I produced, that is, the work I produced while I was distracted. Bown’s analysis, however, goes even deeper and becomes more sadistic throughout the case study of Candy Crush Saga.

“It is self-evident that we don’t truly desire to play Candy Crush but unfortunately have to work, but rather we feel the need for distraction only when we are working, to re-enforce the sense (increasingly lost) that our work has coherent order and value compared to these activities.”

Without these distractions, I may be forced to confront the meaninglessness of my results and discussion section, that it won’t change anybody’s mind or be read by anyone other than the two-peer reviewers forced to read it prior to publication. With the help of Walter Benjamin and later Jean Baudrillard, Bown brings to light that these distractions shield me from an incoherent, fragmented relationship with reality. If I am forced to work without distraction, I may succumb to an alienation so profound as to cripple me from producing anything at all. I am therefore distracted out of necessity.

The analysis doesn’t end there. Though my desk faces the wall which faces the door, there is still one who can see me, argues Bown, and that is: the big Other. This imaginary figure can be thought of as God, Nature, Google or NSA spy-software. It’s something we create to keep us in check, to keep us in agreement with and conforming to tacit social norms, such as not wasting our entire work day playing mindless games on the payclock.

When I swap screens from a pessimistic op-ed about our doomed climate to an SPSS database in less than one second, I’m not hiding from, escaping or resisting the infinite surveillance of the big Other.

“Quite the contrary: we want the big Other to see us at these moments, seeking its affirmation… With the Lacanian idea of the big Other we can take this further and see that embedded into the distraction is the desire for affirmation from the big Other when we close the game or the browser and return to our productive capitalist employment.”

And I do enjoy the satisfaction of wasting time and then ultimately producing something when I eventually “return to work.” Alas, the distraction are indeed vital to my producing anything. Like the muffin I am eating while writing this gives me the calories I need to type, my phone buzzing and youtube blaring provide me the distraction I need to send this off to the Critical-Theory editor [editor’s note: I am currently playing Sim City while editing this].

Logically and quite impeccably structured, “Enjoying It” is filled with analysis I can apply to my everyday life. That’s partly why I enjoyed it. Bown implicates the reader in the analysis. And perhaps this is why he is one of the most well known contributors to the Everyday Analysis Collective. He seamlessly spins pages of funny, piercing, and often grotesque analysis of the quotidian. While there may be no escape from enjoying our idiotic consumption, at the very least you can read “Enjoying It” and uncover your economy of enjoyment.

You can order the book here.