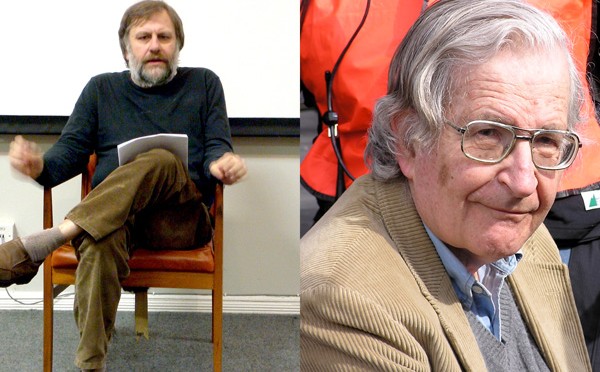 In a piece published on the Verso Blog today, Slavoj Zizek responds to Noam Chomsky’s latest allegations that he has made spurious claims about Chomsky in the past.

Noam Chomsky and Slavoj Zizek have been bickering for a while now. Last year, Chomsky referred to Zizek and Lacan as guilty of “empty posturing,” and found them to be divorced from empirical facts. Zizek fired back, claiming that Chomsky, as a self-proclaimed empiricists, has a history of being empirically wrong. Then, in an essay published on ZNet, Chomsky outlines a history of alleged fabrications by Zizek, calling Zizek’s comments “sheer fantasy.

Now, Zizek has responded to Chomsky’s remarks, citing that he was unaware of Chomsky’s initial criticisms when he called Chomsky empirically wrong.

Zizek responds to Chomsky’s allegations that he had repeatedly falsely attributed a racist quote to him, noting that he had long since apologized for the mistake.

In attributing to Noam Chomsky the statement that Obama is a white guy who took some sun-tanning sessions, I repeated an untrue claim which appeared in Slovene media, so I can only offer my unreserved and unconditional apology.

I would like to add that, even if the statement I falsely attributed to Chomsky were to be truly made by him, I would not consider it a patronizingly racist slur, but a fully admissible characterization in our political and ideological struggle.

And in regards to Zizek’s misplaced characterization of Chomsky as pro-Khmer Rouge, Zizek admits he is in full agreement with Chomsky on the concepts of “worthy and unworthy” victims, but continues to defend his remarks on Chomsky’s being wrong about the Khmer Rouge.

I think the quoted passage confirms that my improvised resume of Chomsky’s position about Khmer Rouge atrocities (“No, this is Western propaganda. Khmer Rouge are not as horrible as that.”) is a correct one. I do not agree in any way with those who accuse Chomsky of sympathizing with Khmer Rouge, although I find the parallel between Cambodia after the KR takeover and France liberated in 1944 very problematic.

Zizek also takes on Chomsky’s claim that he also criticizes ideology. Zizek notes that ideology is not just the exposure of fabrications by governments:

However, in order to explain how people often remain within their ideology even when they are forced to admit facts, one has to supplement investigation and disclosure of facts by the analysis of ideology which not only makes people blind to the full horror of facts but also enables them to participate in activities which generate these atrocious facts while maintaining the appearance of human dignity.

In short, is Chomsky in his thorough dismissal of my work not doing exactly what he is accusing me of: clinging to the empty posture of total rejection with no further ado?

I think one can convincingly show that the continental tradition in philosophy, although often difficult to decode, and sometimes—I am the first to admit this—defiled by fancy jargon, remains in its core a mode of thinking which has its own rationality, inclusive of respect for empirical data. And I furthermore think that, in order to grasp the difficult predicament we are in today, to get an adequate cognitive mapping of our situation, one should not shirk the resorts of the continental tradition in all its guises, from the Hegelian dialectics to the French “deconstruction.” Chomsky obviously doesn’t agree with me here. So what if—just another fancy idea of mine—what if Chomsky cannot find anything in my work that goes “beyond the level of something you can explain in five minutes to a twelve-year-old because” because, when he deals with continental thought, it is his mind which functions as the mind of a twelve-year-old, the mind which is unable to distinguish serious philosophical reflection from empty posturing and playing with empty words?

Read the full response at Verso.