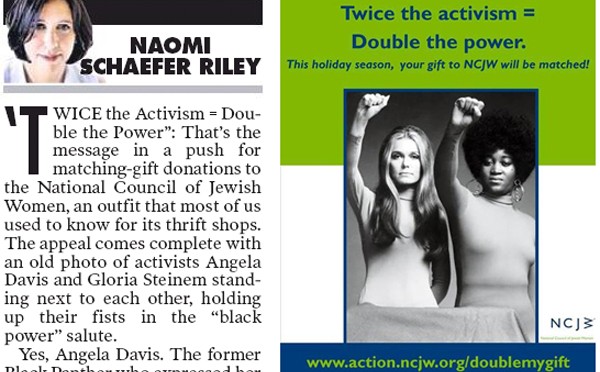 Naomi Schaefer Riley recently penned an op-ed complaining that the National Council of Jewish Women was not quite Jewish enough, as serving non-Jews is clearly an affront to our status as the chosen people. She chose to introduce her argument by complaining about the ad below, featuring Gloria Steinem and “Angela Davis.”

Riley has since issued a correction, and a half-assed apology. That correction, by the way, simply states:

“An earlier version of this column, which also ran in print, misidentified one of the women in the National Council of Jewish Women ad.“

Riley’s article continues to lament the philanthropy-industrial complex, something we here at CT think is also kind of shitty. But Riley takes in a different direction. For instance, complaining about “trendy” causes like “ending racism.” She quotes one author who writes, “I knew things had gone off the track when the local YWCA adopted the slogan ‘Eliminating racism by any means necessary.'”

So maybe there’s something under the surface of Riley’s outrage. Namely, that charity could ever be anything but a perpetuation of the status quo. Not that the NCJW is somehow disrupting the status quo, but her outrage over “Angela Davis” and fighting racism points to an ulterior motive.

Riley has penned tons of other fun articles. The former Wall Street Journal editor once argued in the NY Post  that workplace equality for women is silly because, you know, babies. In another, she declares “solidarity is dead, ladies.”

Correction – An earlier version of this article misidentified a NY post columnist as a racist pig-fucking asshole. Maybe.