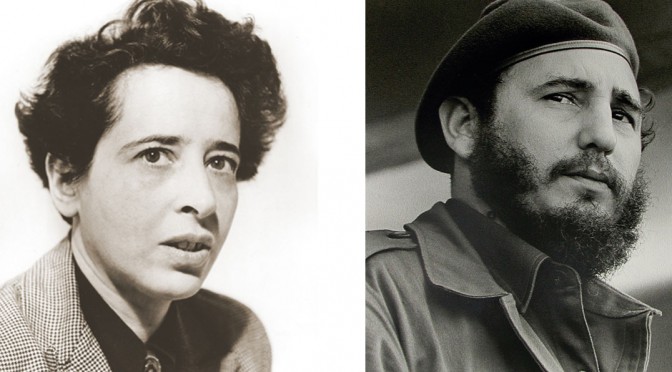 In 1959, Princeton University hosted Fidel Castro, the prime minister of the newly formed Cuban government, for a conference entitled “The United States and the Revolutionary Spirit.”

In an amazing historical coincidence, it was the same conference that kicked off Hannah Arendt’s research for “On Revolution,” and Arendt was presumably in attendance for Castro’s speech.

It was Arendt’s first year at Princeton, after she became Princeton’s first woman awarded a full professorship.

Castro delivered the keynote speech on the evening of Monday, April 20, 1959. According to the notes that [Paul] Taylor took at the event, the Cuban prime minister opened his remarks proposing that the scholars and students in attendance listen to him as a practical revolutionary, as someone who did not study but rather produced a revolution. In Castro’s words, the Cuban revolution had knocked down two myths of 20th century Latin American history: It had shown that a revolution was able to defeat a professional army that possessed modern weapons, and it had shown that it was possible to create a revolution when the people were not hungry.

The focus of the seminar, according to Rojas, was to explore the “parallel between the American, French and Russian revolutions as opposing models of social change.”

“According to Taylor’s notes at the conference,” Rojas notes, “Castro argued that the Cuban revolution belonged more to the 1776 tradition than to 1789 or 1917 traditions because it did not encourage class warfare.

Arendt’s book “On Revolution,” published just 4 years later in 1963, juxtaposes the French and American revolutions. Unlike many of her peers, Arendt argues that the American revolution was a success, despite the fact that the revolutionary spirit has been lost.  In the acknowledgements of the book, she cites the conference as the “starting point” of the book.

Revolutionary Cuba was no stranger to critical thought, the country hosted cultural congresses and invited leading European thinkers. One of the more notable events spurred by these congresses was the meeting of Che Guevara and Fidel Castro with Jean-Paul Sartre and Simone de Beauvoir, a year after the Princeton talk. Of course, the initial euphoria of the revolution quickly evaporated, alienating many of the thinkers that Cuba once considered intellectual allies.