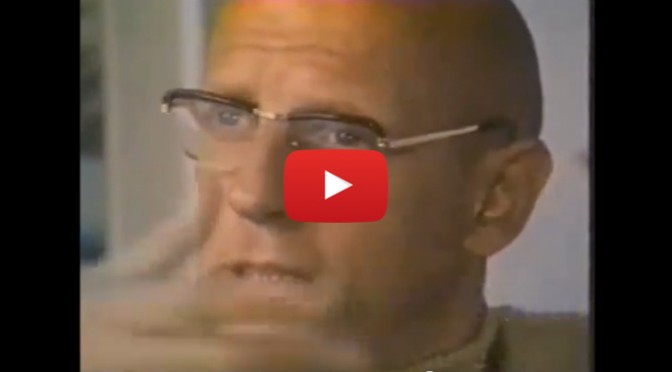 Lost for nearly 30 years, an interview has recently surfaced on YouTube between Michel Foucault and Dutch anarchist Fons Elders. The interview was conducted before Foucault’s debate with Noam Chomsky, which was moderated by Elders. Elders, some may recall, paid Foucault partially in hash for the debate and tried to compel Foucault to appear in a red wig.

The history of the video is as interesting as the footage itself.  Lionel Claris, who worked with Elders to translate the video into English, reports that interview broadcasted to Dutch TV in 1971 was all but lost after the station caught fire. The 15 minutes in the YouTube video is all that remains of an interview that reportedly last over an hour. This video is the version edited by the Dutch TV station to omit Elder’s questions, and thus only contains Foucault speaking with some untranslated Dutch filler on Foucault. The interview takes place in Foucault’s apartment in Paris on Rue de Vaugirard. Claris writes that he found the footage by chance, while doing undergraduate research at Hampshire College.

The transcript of the interview was retained, however, and published in the 2012 book “Freedom and Knowledge.” Fons Elder has posted part of that book for free online here. It can also be purchased from his website.

In the interview, Foucault discusses his work in “Madness and Civilization” and ties it to his greater project. He goes on to talk about knowledge and truth, the subject and societal tolerance. “The universality of our knowledge,” Foucault explains, “has been acquired at the cost of exclusions.”

I wondered, if at all, we Westerns were deceiving ourselves greatly. We readily imagine that we are a very tolerant society – that we have welcomed all the forms of the past, all the cultural forms foreign to us, that we welcome also behavior, language, and sexual deviations, etc. I wonder if this is an illusion…in other words, in order to know madness it has to first be excluded. Maybe we could also say that in order to know other cultures…we must no doubt have had not only to marginalize them, not only look down upon them, but also to exploit them, to conquer them and in some ways through violence to keep them silent.”

“Deep down what is experience of drugs if not this,” he says, “to erase limits, to reject divisions, to put away all prohibitions, and then ask oneself the question, what has become of knowledge?”

Foucault experimented with drugs in his personal life, and elsewhere had described dropping acid in America’s Death Valley as a transformational life experience.

Later, in an elucidating moment, Foucault responds to Elders about his personal life.

Some have argued that Foucault’s work was, in a way, biographical. In his personal life, Foucault dealt with depression and at times tried to commit suicide. His mental illness was often attributed, by doctors of his time, to his homosexuality. It should be no surprise then that Foucault’s work examines problems from his own life – conceptions of madness and sexuality, the medical system, and the idea of normalcy.