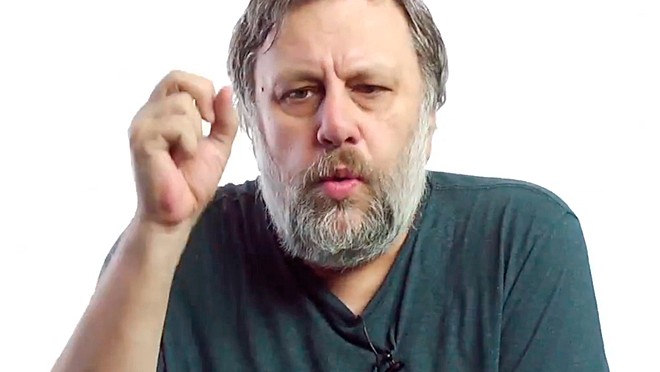 Zizek is one of the more controversial authors of our time. He seems to have no problem calling vegetarians “degenerates” or shoeing away most of his fans. So it’s no surprise that he’s gained a lot of fans and a lot of critics. One fan, a nice fellow named Santiago Zabala, published a nice long love letter to Zizek’s philosophy entitled “Slavoj Zizek and the Role of the Philosopher.” And, like the start of any good flame war, the article was summarily shit on by most post-colonial critics everywhere. Why?  Well, Zizek is pretty damn Eurocentric.

If you’ve been confused by a recent spat between Zizek and, well, everyone, you’re not alone. We previously spoke about Zizek responding to his critics, but without proper context, you may have been lost. We therefore present the Critical-Theory guide to that time Zizek pissed everyone off (again).

This war of words occurred mainly over Al-Jazeera’s opinion blog, with the exception of Zizek’s public lecture at the Birbeck Institute for the Humanities, because he’s too cool for Al-Jazeera. Folks featured are Santiago Zabala, Hamad Dabashi, Slavoj Zizek, Walter Mignolo and Michael Marder.

In: Slavoj Zizek and The Role of the Philosopher

Santiago Zabala begins this dispute by long ode to that man that is Slavoj Zizek. He describes Zizek  as one “fuse together Martin Heidegger’s “fundamental ontology”, Francis Fukuyama’s “end of history” and Naomi Klein’s “shock doctrine” in order to undermine our liberal and tolerant democratic structures … a practice few intellectuals are capable of”. His engagement with the specific struggles of Slovenia, Julian Assange and Palestine and the broader theoretical horizon of communism are what makes him, in Zabala’s words, a “thinker of our age”, able to delve into the mundane sequence of political and cultural events and artifacts and integrate it into the theoretically complex worlds of the theories of Marx, Lacan and Hegel.

In: Can Non-Europeans Think?

There are many important and active philosophers today: Judith Butler in the United States, Simon Critchley in England, Victoria Camps in Spain, Jean-Luc Nancy in France, Chantal Mouffe in Belgium, Gianni Vattimo in Italy, Peter Sloterdijk in Germany and in Slovenia, Slavoj Zizek, not to mention others working in Brazil, Australia and China.

This,  Dabashi argues, is a location of thought in the global north, and a degradation of the value of thought emanating from the global south. He argues that the fact that the European intellectuals receive the distinction of being named while the others are merely clumped into a large category portrays a larger bias in which these philosophers are declared ethnic and are discounted or sectioned off into an independent area of study, whereas the European’s work is declared philosophy. Rather, he argues that philosophy such as Zizek’s, Critchley’s or Butler’s should be offered as European philosophy, not the universal depiction of reality which he claims Zabala attempts to sell Zizek’s approach as.

Then Zabala is Like “Communism is Alive! Long Live Communism!”

In: “Zizek and the Communist Horizon”

Zabala responds to Dabashi’s contention that he is Eurocentric by arguing that Communism, as offered by Zizek, is a universal lens through which to interpret reality. Against the particularity, he argues that we can engage with the communist analytic method of dialectical materialism in everyday life and act through that lens. This is not through the application of stale maxims, but of the adoption of a certain approach or way of engaging with reality that lends coherence to the scattered sequences of events such as 9/11 or the Financial Meltdown of 2008. In response to the real conditions of the oppression by capitalism and the impending extinction due to capitalistic exploitation, we are called to resist this in a universalistic, communistic manner. Instead of acting to curing the symptoms of capitalisms domination in totalitarianism, instability and terror, we have to get to the root of the problem: capitalism.

And Then Walter Mignolo Chimes In

Walter Mignolo argues that the work of these de-colonial philosophers who are underrepresented in the original article are more relevant to the concerns of their people. He begins by arguing that Zabala believes in a hierarchy of work and struggles rather than a non-hierarchical relationship between struggles, which he believes is embodied by Dabashi. He then responds to Zizek’s article “A Leftist Plea for ‘Euro-centrism’”, and specifically quotes Zizek’s  first line:

When one says Eurocentrism, every self-respecting postmodern leftist intellectual has as violent a reaction as Joseph Goebbels had to culture – to reach for a gun, hurling accusations of proto-fascist Eurocentrist cultural imperialism. However, is it possible to imagine a leftist appropriation of the European political legacy?

“A self-respecting decolonial intellectual will reach instead to Frantz Fanon: ‘Now, comrades, now is the time to decide to change sides. We must shake off the great mantle of night, which has enveloped us, and reach, for the light. The new day, which is dawning, must find us determined, enlightened and resolute. So, my brothers, how could we fail to understand that we have better things to do than follow that Europe’s footstep.’”

To Mignolo, the relevance of Zizek’s ideas is not universal but is rather so only to the European intellectuals from which these ideas originated. Rather each population requires its own solutions to its own problems, which can be a disengagement from capitalism or communism or both. He cites Bolivia where “communism” is a problematic social arrangement for the Aymaras and Quechuas of the area.

In his public lecture at the Birbeck Institute of Humanities, Zizek responds to Mignolo’s arguments.
He begins by disputing the ability to solve the problems of capitalism of the philosophers Mignolo elevates. He specifically takes issue with Wang Hui, who he characterizes as a “Left Friedman” who decenters the struggle against capitalism from capitalism itself, but instead to the evil monopolies which destroy proper free-market exchange. Zizek reads this as the apologia that thought not centered upon the rejection of capitalism makes for it.
He proceeds by contesting Mignolo’s invocation of Fanon. Rather than a sanitized Fanon who simply opts for symbolic acts and is a true expression of an Algerian de-colonial agency, he emphasizes the violent, universalizing Fanon who utilizes the “Eurocentric” work of Lacan and Hegel. He uses an extended quote by Fanon to make the argument that when he faces “de-colonial” intellectuals like Mignolo, he reaches instead for Fanon:

I am a man and what I have to recapture is the whole past of the world, I am not responsible only for the slavery involved in Santo Domingo, every time man has contributed to the victory of the dignity of the spirit, every time a man has said no to an attempt to subjugate his fellows, I have felt solidarity with his act. In no way does my basic vocation have to be drawn from the past of peoples of color. In no way do I have to dedicate myself to reviving some black civilization unjustly ignored. I will not make myself the man of any past. My black skin is not a repository for specific values. Haven’t I got better things to do on this earth than avenge the blacks of the 17th century?

I as a man of color do not have the right to hope that in the white man there will be a crystallization of guilt towards the past of my race. I as a man of color do not have the right of stamping down the pride of my former master. I have neither the right nor the duty to demand reparations for my subjugated ancestors. There is no black mission. There is no white burden. I do not want to be victim to the rules of a black world. Am I going to ask this white man to answer for the slave traders of the 17th century? Am I going to try by every means available to cause guilt to burgeon in their souls? I am not a slave to slavery that dehumanized my ancestors. It would be of enormous interest to discover a black literature or architecture from the 3rd century B.C, we would be overjoyed to learn of the existence of a correspondence between some black philosopher and Plato, but we can absolutely not see how this fact would change the lives of 8 year old kids working the cane fields of Martinique or Guadeloupe. I find myself in the world and I recognize I have one right alone: of demanding human behavior from the other.

What is rather the proper path of these struggles is to recognize the universalizing possibilities of communism and the truth of dialectical materialism, according to Zizek.

In: A Post-Colonial Comedy of Errors

Marder largely responds to the article from Dabashi by arguing that Dabashi’s chutzpah sets him at the center of the world while ignoring that Europe itself is full of divisions and minorities such as Southern Europeans and Balkan states, where Zabala and Zizek hail from, respectively. He also argues that the general depiction of the list of authors as Eurocentric ignores the variations of each author and their anti-hegemonic orientation which demands a more individual analysis and respect to the work actually put out rather than location. As Anti-Eurocentrism has oriented itself away from these “grand narratives” so too have these thinkers. Rather, much as in Shakespeare’s Comedy of Errors where Dromio is beaten for deeds not committed, these philosophers are accused of crimes not committed.

Santiago Zabala is a professor at the University of Barcelona. He’s published books such as Hermeneutic Communism and the Remains of Being.

Slavoj Zizek is Slavoj Zizek. His books include The Year of Dreaming Dangerously and Living in the End Times.