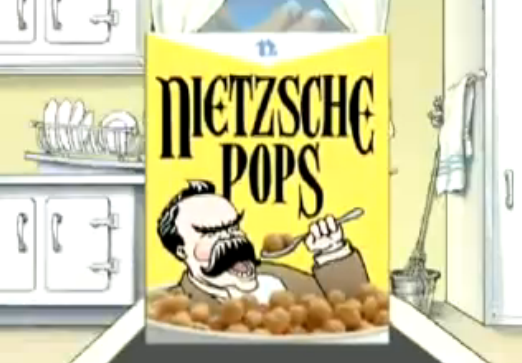 We’ve known for a while now that breakfast cereal is a microcosm of imperialism, ableism, and speciesism. Ever wonder why rabbits can’t eat Trix? Because the human-animal binary is necessary for the formation of an able-bodied white masculine subject in the service of capitalism and imperialism. Maybe.

Diatribes against children’s cereal aside, is this video some drug-induced commentary on cereal’s inextricable link to fascism? Also maybe.

The video is the work of Ben Hillman, whose website describes himself as “a film maker, designer, author and illustrator who loves subatomic particles and Betty Boop.”

It features a small child consuming Nietzsche Pops before transforming into a world-conquesting ubermensch.

Do you wake up in the morning feeling more like a Klärk Kent than an Aryan Superman? Getting left behind in the Master Race? Tired of the same old genetically-inferior morning meal?

Then try the first breakfast cereal that is not afraid to proclaim that “God Is Dead.” This great new product has the bold new taste that will keep you satisfied for a thousand years. In fact, it’s already causing quite a Führer. So stare into the Abyss! Stare into a bowl of Nietzsche Pops!

It also somehow got tons of international acclaim (probably for being awesome):

Ben’s independent animation Nietzsche Pops was screened on Bravo and the Independent Film Channel and was aired on MTV’s Liquid Television, PBS, La Sept Arte and Kanal 4. Featured in over 40 film festivals around the world, “Nietzsche Pops” has won numerous awards including the Cine Golden Eagle in Washington DC, and First Prize in the Philadelphia International Film Festival and the New Orleans Film Festival.