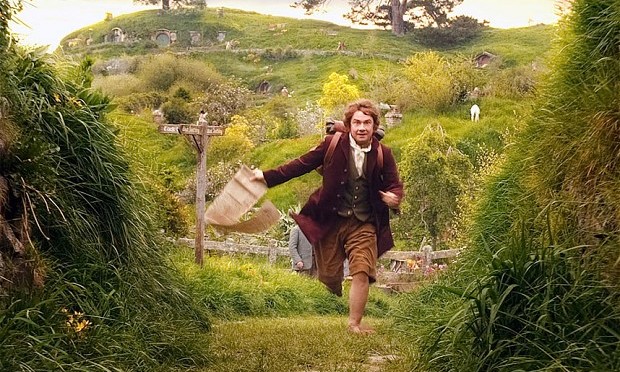 Editor’s note: The following is a contribution of JL Schatz of Binghamton University titled “The Brown Wizard’s Unexpected Politics: Speciesist Fiction and the Ethics of The Hobbit.” Critical-Theory.com does not endorse PETA. Seriously, they’re awful and there is like a million better animal rights organizations. Any formatting errors are most likely the fault of CT and not the author.

Entertainment is not a neutral event.  It is a political one.  Going to the movies is a social act that expresses community.  What tops the box office to a large degree reflects what a society is, what it values, and what it’s willing to exploit.  What we chose to consume on the screen not only shapes cultural norms and discourse but also has tangible consequences for those who are filmed.

As Stuart and Elizabeth Ewen emphasize in Channels of Desire: The politics of consumption must be understood as something more than what to buy, or even what to boycott.  Consumption is a social relationship, the dominant relationship in our society—one that makes it harder and harder for people to hold together, to create community.  At a time when for many of us the possibility of meaningful change seems to elude our grasp, it is a question of immense social and political proportions. (hooks 376)

The 2012 global box office smash, The Hobbit: An Unexpected Journey, directed by Peter Jackson, is a perfect example of the above quote.  The film was renamed by the People for the Ethical Treatment of Animals (PETA) as an Unexpected Cruelty[1] once it was discovered that as many as 27 animals “died because they were housed on a treacherous farm full of ‘death traps,’” while many more were mistreated (Cooke).  Jackson has vehemently denied the allegations saying that there was “no mistreatment, no abuse. … Absolutely none” (Lonaz).  He abdicates responsibility of his crew and Warner Brothers by blaming the farm where the animals were housed.  This is particularly worrisome given that the very theme of the movie is that no violence is beyond one’s community and that everyone has the responsibility to band together to fight injustice.  Had the Elves come to the Dwarfs assistance to defend their home against the dragon at the start of the film the entirely unrelated Hobbit Bilbo Baggins would never have been asked by Gandalf to go on a journey to get the Dwarfs’ home back.

The popular response to PETA’s claims, much like Jackson’s, were largely dismissive.  “The American Humane Association, which is overseeing animal welfare on the films, says no animals were harmed during the actual filming.  But it also says … [that it has] shortcomings in its oversight system, which monitors film sets but not the facilities where the animals are housed and trained” (Perry).  Meanwhile, Elijah Wood, who played Frodo, claimed that PETA’s accusation “was the most ridiculous thing ever” despite admitting that he “didn’t even read the full report” and that he was only on the set for a very limited time (Child).  These defenses turn the fiction of the film (what the cameras actually captured) into being more important than the reality (what actually happened when the cameras weren’t on).  Jackson’s film still got the AHA’s seal of approval for animal treatment precisely because of this disconnect between fiction and reality.  The Hobbit is by no means the only movie that gets this seal without deserving it.  The entire process of animal acting is fraught with abuse that doesn’t get reported because the cameras aren’t rolling when it takes place[2].  As French philosopher Jean Baudrillard has explained, this disjunction is particularly troublesome because

an unreal event … is merely the expression of a—neither good nor bad, but quite simply immoral—collective will. … And we are not passive spectators of this fatal episode, but full-blown actors in it, playing our part in a lethal interactivity for which the media provide the interface. … There are no longer either actors or spectators; all are immersed in the same reality, in the same revolving responsibility, in a single impersonal destiny which is merely the fulfillment of a collective desire. (Impossible Exchange: 137-138)

From the patron in the movie theater to the characters on the screen, as well as the actors who play them, all are responsible because each film is a communal event that transcends the realms of Middle Earth and connects the collective desire of human and Dwarf alike.  The consumption of a movie ticket and popcorn means much more than the right to sit in a seat for three-hours and a snack.

It is sad that the AHA and others chose not to be more like the character Radagast, who valued the life of the forest and the surrounding animals as dear as his own.  As the brown wizard, Radagast did everything is his power to protect and revive every creature he came across.  He lamented over every death no matter how small or how personally connected he was to them.  This is why Gandalf recognizes Radagast as extremely wise.  It is also why Radagast rushes to the aid of Gandalf and his party when the Orcs come for their heads.  Radagast opts to distract the Orcs in order to help Gandalf escape instead of outright killing them.  To Radagast, all life has value.  Racing to the defense, the brown wizard exposes all that is wrong in the popular response to the filming of The Hobbit.  Despite being a relatively minor character, he demonstrates the importance of banding together beyond one’s community in the name of all life.  As Gandalf explains to Bilbo earlier in the film, “True courage is not knowing when to take a life; but when to spare one.”  Here we find that the very definition of courage requires one to refuse to remain silent and to speak out for those lives that everyone else thinks can be killed without a second thought.  This is why Bilbo spares Golum’s life in The Hobbit despite having the opportunity to kill him.  It is also why Frodo spares Golum’s life repeatedly throughout the trilogy despite Samwise and others telling him not to.  It are those who are rendered most radically Other, whose lives are determined without value, that are the most in need of heroes.  “Whether we defend the violation of another’s life through our denial of reality which makes us uncomfortable, or through outright enthusiasm for oppressive power relations, the results are devastating. … Secrecy serves to conceal the details of the horror from all but those who must participate in it to keep the cogs of the machinery running smoothly” (Spiegel 80).

Of course, to speak out need not always be a literal protest of events.  Rather, it is a profound understanding of solidarity with those who can’t speak or appear only off-screen.  As an audience, in fact, our voices are always already silent not only because of the literal silence imposed upon the theater when the lights go down but also because what isn’t caught by the camera is determined by many as wholly irrelevant.  This does not make our speaking silence over abuse meaningless, any more than Radagast’s struggling to save single animals as others die around him fruitless.  Baudrillard argues,

What is essential is that nothing escape[s] the empire of meaning, the sharing of meaning. … They, the animals, do not speak.  In a universe of increasing speech … only they remain mute, and for this reason they seem to retreat far from us, behind the horizon of truth.  But it is what makes us intimate with them.  It is not the ecological problem of their survival that is important, but still and always that of their silence.  In a world bent on doing nothing but making one speak, in a world assembled under the hegemony of signs and discourse, their silence weighs more and more heavily on our organization of meaning. (1994: 137)

When viewers can pay attention to how meaning is organized by their relationship with animals in films they can not only become a hero in reality but also develop a deeper appreciation with the fictions that inform their lives.  While many may see this as a trivial act, as Gandalf explains his reasoning for choosing a Hobbit with no extraordinary skills to accompany the Dwarfs, “I have always found that it is the small things, the everyday deeds, that keeps evil in check.”  Unlike Sauramon who believes that Middle Earth is “at peace,” and that the events of The Hobbit are “hardly a prelude to war,” we must realize that a trilogy of violence is about to unfold.  The only thing that can prevent this violence from repeating itself is an unexpected alliance between movie goers, the cast and crew, as well as the fictional characters whose relationship with animals become alive on the screen.

One suggestion PETA has for the sequels is that Jackson delves even deeper into the illusion of fiction; instead of trying to cling to the reality of animal actors.  They claim, “He is the CGI master and has the ability to make the animals and other interesting creatures in his movies 100% CGI” (Child).  While this wouldn’t instantly end all animal abuse—certainly many in the cast and crew would continue to eat meat—it would give meaning to the silence many expressed when animals were unnecessarily injured and killed in order to tell a story.  Baudrillard asks,

Can we avoid this retro-curvature of a history that backtracks on its footsteps and effaces its own traces … in the way one rewinds a tape deck?  We are so accustomed to viewing all films over and over again, the fictitious ones as well as those pertaining to our lives[,] … that we are quite capable … to rethread history as one threads a film wrong side up. … The only way to avoid this … is to place ourselves straightaway on an alternative temporal orbit … and go beyond the end by not allowing it time to take place. … This would at least provide us with the possibility of retaining the memory and glory, and under the auspices of revision and rehabilitation we could begin cancelling each and all the events that have come before, forcing them to repent. (The Illusion of the End: 11-13).

The constant repetition of Tolkien’s work provides the perfect opportunity for the viewer to alter the course of history if they are merely willing, like Bilbo, to step outside their hole despite all the dangers they may face in doing so.  Certainly, to take on the causes of others—especially those entirely removed from the Self—engages in an endless journey that will spawn new imaginations and reality for generations to come.  Our fictions are the ideal place to start because they are always already subject to change and reinterpretation.  Indeed, there is no creature or site of resistance too small to matter once we approach consumption and entertainment differently by understanding it as a political event.

[1] For more details on the abuse occurred during the filming of The Hobbit see http://www.peta.org/features/the-hobbit-unexpected-cruelty.aspx .

[2] For more information on animal abuse in entertainment and the AHA’s loopholes see http://www.peta.org/issues/animals-in-entertainment/animal-actors.aspx as well as http://www.cbc.ca/fifth/cruelcamera/ .