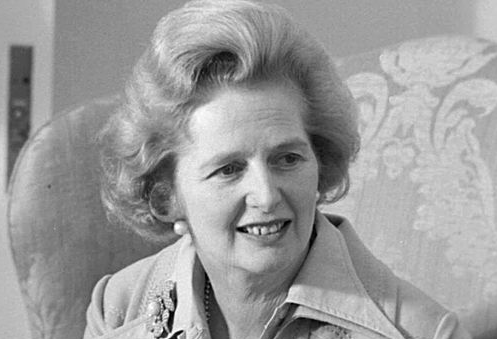 Critical theorist Slavoj Zizek argues in his latest article in The New Statesman that the left should learn from the genius of Margaret Thatcher. Zizek celebrates the authoritarian nature of Thatcher’s politics and, surprise, contradicts his earlier celebration of Occupy Wall Street-esque participatory politics.

He opens by defining “the Master” (spoiler alert: he thinks we all need one).

In the last pages of his monumental Second World War, Winston Churchill ponders on the enigma of a military decision: after the specialists (economic and military analysts, psychologists, meteorologists) propose their analysis, somebody must assume the simple and for that very reason most difficult act of transposing this complex multitude into a simple “Yes” or “No”. We shall attack, we continue to wait… This gesture, which can never be fully grounded in reasons, is that of a Master. It is for the experts to present the situation in its complexity, and it is for the Master to simplify it into a point of decision.

The Master is needed especially in situations of deep crisis. The function of a Master is to enact an authentic division – a division between those who want to drag on within the old parameters and those who are aware of the necessary change.

And then Zizek turns face on his earlier endorsement of Occupy Wall Street and other democratic movements:

It is this myth of non-representative direct self-organisation which is the last trap, the deepest illusion that should fall, that is most difficult to renounce.

Why? Because people are lazy. Well, fair enough.

The large majority – me included – wants to be passive and rely on an efficient state apparatus to guarantee the smooth running of the entire social edifice, so that I can pursue my work in peace.

Where Zizek’s critique gets really shitty is by invoking Walter Lippman. Lippman wrote a book back in 1922 called Public Opinion that argued that democracy was kind of pointless because people are stupid and lazy. Carl Schmitt cited the book in his critique of parliamentary democracy. You know, Schmitt, the guy who was too busy refusing to apologize for being a Nazi to keep writing after World War II. It may sound like a guilt  association argument, until you realize that every philosopher that invokes this Platonic distaste for the masses usually ends up being a raging dick. Zizek thinks the technocratic class to compensate for the incompetent masses advocated by Lippmann is a sweet idea.

The large majority – me included – wants to be passive and rely on an efficient state apparatus to guarantee the smooth running of the entire social edifice, so that I can pursue my work in peace. Walter Lippmann wrote in his Public Opinion (1922) that the herd of citizens must be governed by “a specialised class whose interests reach beyond the locality” – this elite class is to act as a machinery of knowledge that circumvents the primary defect of democracy, the impossible ideal of the “omni-competent citizen”. This is how our democracies function – with our consent: there is no mystery in what Lippmann was saying, it is an obvious fact; the mystery is that, knowing it, we play the game. We act as if we are free and freely deciding, silently not only accepting but even demanding that an invisible injunction (inscribed into the very form of our free speech) tells us what to do and think. “People know what they want” – no, they don’t, and they don’t want to know it. They need a good elite, which is why a proper politician does not only advocate people’s interests, it is through him that they discover what they “really want.”

Via The New Statesman