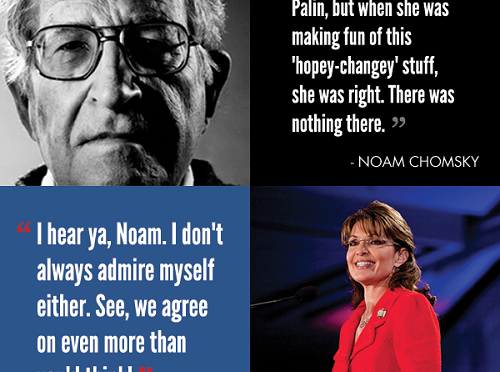 Sarah Palin, the one-time vice-presidential candidate and the worst thing to happen to feminism since misogyny, has found some common ground with anarchist Noam Chomsky. Chomsky, in an interview with Democracy Now, had remarked, “I don’t usually admire Sarah Palin, but when she was making fun of this ‘hopey-changey’ stuff, she was right. There was nothing there.”

Now Sarah Palin has responded via her Facebook page, even dedicating an image to Chomsky. Palin responded “I hear ya, Naom. I don’t always agree with myself either. See, we agree on even more than you’d think” in the image below.

Some comically believe that Chomsky has joined team Palin, with one commenter noting “This is coming from a red commie? Wow. Maybe someone is waking up finally!”