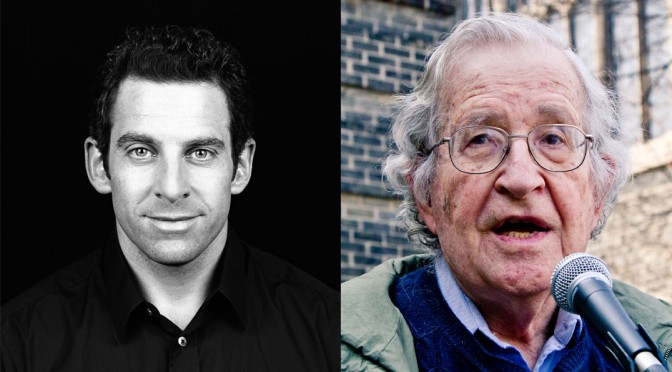 On April 26 of this year, Harris reached out to Chomsky over some comments he had made referring to Harris as a “religious fanatic who worships the state.” Except, well, Chomsky didn’t directly call him that, he was speaking of New Atheists writ large, and arguably Christopher Hitchens specifically. Either way, Harris took to defending his comrades and reached out to Chomsky to clarify their respective positions in a public dialogue.

Harris, to his credit, maintained an impressive civility in the face of pure, unadulterated contempt from Chomsky.

In the initial email, Harris writes:

So I just wanted to clarify that, although I think we might disagree substantially about a few things, I am far more interested in exploring these disagreements, and clarifying any misunderstandings, than in having a conventional debate.

If you’d rather not have a public conversation with me, that’s fine. I can only say that we have many, many readers in common who would like to see us attempt to find some common ground. The fact that you have called me “a religious fanatic” who “worships the religion of the state” makes me think that there are a few misconceptions I could clear up. And many readers insist that I am similarly off-the-mark where your views are concerned.

Perhaps I have some misconceptions about you.  Most of what I’ve read of yours is material that has been sent to me about my alleged views, which is completely false.  I don’t see any point in a public debate about misreadings.  If there are things you’d like to explore privately, fine.  But with sources.

Harris argues that, despite the sheer amount of death the United States has produced, it’s different, because we’re, uh, special snowflakes? To Harris, intent matters: the United States may kill a few civilians here, upend a few democratic governments there, but at the end of the day, we really just want to do good. Radical Islam, on the other hand, threatens everything wholesome in the world.

Except this whole fixation on “intent” seems to beg some sort of ontological goodness of a state. For Harris, the genocide of the Natives or the enslavement of Africans is a mistake the United States has to atone for, rather than a foundational crime. Conversely, if you’re brown and kill a few hundred civilians, you’re permanently the bad guy.

The Harris-Chomsky “debate” boils down to Noam Chomsky’s comments after 9/11. Sure, the wanton murder of civilians is bad – but the acts of 9/11 pale in comparison to a slew of US atrocities.  Chomsky uses the bombing of the Al-Shifa pharmaceutical factory in Sudan under Clinton as an example – the resulting drug shortage in the country killed tens of thousands of civilians. Harris argues that it’s different, employing the Urkel Defense. 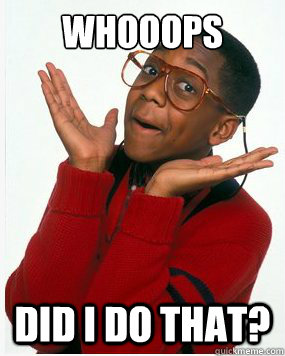 Chomsky, points to his previous comments on the matter:

In this case, we can hardly doubt that the likely human consequences were understood by US planners. The acts can be excused, then, only on the Hegelian assumption that Africans are “mere things,” whose lives have “no value,” an attitude that accords with practice in ways that are not overlooked among the victims, who may draw their own conclusions about the “moral orthodoxy of the West.”

Harris continues to prod Chomsky about intent, replying “it still seems to me that everything you have written here ignores the moral significance of intention.”

Chomsky’s lengthy reply contains further proof that the road to hell is paved in good intentions, a litany of US atrocities, and a decent amount of shade thrown at Harris.

I am sorry you are unwilling to retract your false claim that I “ignore the moral significance of intentions.” Of course I did, as you know.  Also, I gave the appropriate answer, which applies accurately to you in the al-Shifa case, the very case in question.

If you had read further before launching your accusations, the usual procedure in work intended to be serious, you would have discovered that I also reviewed the substantial evidence about the very sincere intentions of Japanese fascists while they were devastating China, Hitler in the Sudetenland and Poland, etc.  There is at least as much reason to suppose that they were sincere as Clinton was when he bombed al-Shifa.  Much more so in fact.

Therefore, if you believe what you are saying, you should be justifying their actions as well.  I also reviewed other cases, pointing out that professing benign intentions is the norm for those who carry out atrocities and crimes, perhaps sincerely – and surely more plausibly than in this case.  And that only the most abject apologists justify the actions on the grounds that perpetrators are adopting the normal stance of criminals.

I am also sorry that you evade the fact that your charge of “moral equivalence” was flatly false, as you know.

And in particular, I am sorry to see your total refusal to respond to the question raised at the outset of the piece you quoted.  The scenario you describe here is, I’m afraid, so ludicrous as to be embarrassing.  It hasn’t even the remotest relation to Clinton’s decision to bomb al-Shifa – not because they had suddenly discovered anything remotely like what you fantasize here, or for that matter any credible evidence at all, and by sheer coincidence, immediately after the Embassy bombings for which it was retaliation, as widely acknowledged.  That is truly scandalous.

And of course they knew that there would be major casualties.  They are not imbeciles, but rather adopt a stance that is arguably even more immoral than purposeful killing, which at least recognizes the human status of the victims, not just killing ants while walking down the street, who cares?

In fact, as you would know if you deigned to read before launching accusations, they were informed at once by Kenneth Roth of HRW about the impending humanitarian catastrophe, already underway.  And of course they had far more information available than HRW did.

Your own moral stance is revealed even further by your complete lack of concern about the apparently huge casualties and the refusal even to investigate them.

As for Clinton and associates being “genuine humanitarians,” perhaps that explains why they were imposing sanctions on Iraq so murderous that both of the highly respected international diplomats who administered the “Oil for food” program resigned in protest because they regarded them as “genocidal,” condemning Clinton for blocking testimony at the UN Security Council.  Or why he poured arms into Turkey as it was carrying out a horrendous attack on its Kurdish population, one of the worst crimes of the ‘90s.  Or why he shifted Turkey from leading recipient of arms worldwide (Israel-Egypt excepted) to Colombia, as soon as the Turkish atrocities achieved their goal and while Colombia was leading the hemisphere by far in atrocious human rights violations.  Or why he authorized the Texaco Oil Company to provide oil to the murderous Haitian junta in violation of sanctions.  And on, and on, as you could learn if you bothered to read before launching accusations and professing to talk about “ethics” and “morality.”

I’ve seen apologetics for atrocities before, but rarely at this level – not to speak of the refusal to withdraw false charges, a minor fault in comparison.

Since you profess to be concerned about “God-intoxicated sociopaths,” perhaps you can refer me to your condemnation of the perpetrator of by far the worst crime of this millennium because God had instructed him that he must smite the enemy.

No point wasting time on your unwillingness to respond to my request that you “reciprocate by referring me to what I have written citing your published views.  If there is anything I’ve written that is remotely as erroneous as this – putting aside moral judgments – I’ll be happy to correct it.”

Plainly there is no point pretending to have a rational discussion.  But I do think you would do your readers a favor if you presented your tale about why Clinton bombed al-Shifa and his grand humanitarianism.  That is surely the least you can do, given your refusal to withdraw what you know to be completely false charges and a display of moral and ethical righteousness.

The rest of the exchange is rather lengthy. Harris suggests to Chomsky that he “clean up” his pettiness should he want to publish it (Chomsky doesn’t care) and suggests that Chomsky’s emotions have gotten the better of him (they haven’t).

Harris finally concludes by saying (before asking Noam if he can publish it on his site):

I’m sorry to say that I have now lost hope that we can communicate effectively in this medium. Rather than explore these issues with genuine interest and civility, you seem committed to litigating all points (both real and imagined) in the most plodding and accusatory way. And so, to my amazement, I find that the only conversation you and I are likely to ever have has grown too tedious to continue.