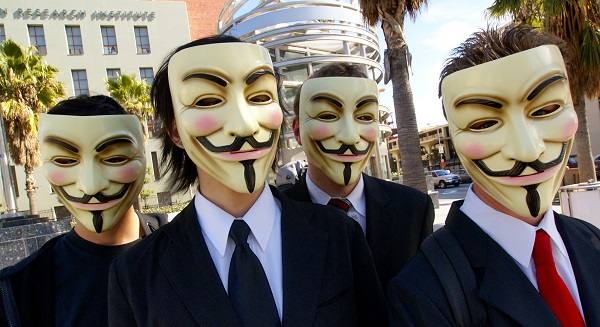 The following article has been re-published, with the permission of the author, from the Huffington Post. See the original article here.

Radical political struggle today wears a mask. From motorcycle helmets worn by German Autonomists in the 1980s to the Guy Fawkes masks worn at the #MillionMaskMarch that took place on Tuesday, Nov. 5, it is possible to identify the following global trend within radical Left movements of the last thirty years: almost all of them wear masks. The Zapatistas with their ski-masks, the Global Justice Movement with its black, white, pink, clown and other masked “blocs,” and today Occupy and Anonymous, all wear masks. This is no coincidence. There is an historical and political significance to this phenomenon. It is part of a new set of political strategies that rejects political representation and identity in favor of direct democracy and equality.

On Tuesday, November 5th, protesters wearing Guy Fawkes masks demonstrated in more than 400 cities around the world in celebration of Guy Fawkes day. From Barcelona to Tokyo, hundreds of thousands protested in the streets and on the internet against political corruption, corporate greed and NSA spying. Despite the explicit thematization of the mask, almost no commentary so far has taken seriously the political meaning of these masks. The closest so far is an article in the Gothamist by Marc Yearsley, titled, “Million Mask March Protests Government, Masks Profit Time Warner.” The article points to the hypocrisy that the profit made from selling Guy Fawkes masks goes to a corporation that lobbies heavily “in favor of internet censorship.” But it remains unclear why this group and others are wearing masks in the first place.

Thus, let me propose the following three explanations for the tactical usage of masks at the recent #MillionMaskedMarch.

1. The mask rejects the political representation of the party and state. Historically, the goal of many social movements has been to publicly demonstrate the power, unity, and identity, of an unrepresented group. “We are here, we are ‘X'”. However, by hiding their faces in public the Zapatistas, black blocs, Occupiers and Anonymous groups are making a statement against the corruption and misrepresentation that is structurally inherent to the very form of the party and state as such. Unlike the unmasked Tea Partiers, none of these masked groups are looking to be represented by a party nor are they trying to create a party of their own. They are looking for a radical change to the party system as such. The mask is thus a symbolic and practical rejection of the individual identities that parties and states require in order to “represent” their members.

2. The mask creates a political universalism. Historically, most (although not all) social movements have focused on national and local issues particular to a specific group of people: the civil rights movement, gay liberation, women’s liberation, indigenous rights, even the class struggle’s internationalism. The creation of these identities is both what allowed for their relative political gains but also what allowed them to be appropriated as multicultural voters and target markets. By wearing masks, however, Anonymous and its historical precursors are trying to create a global and universal form of political agency that explicitly resists this sort of appropriation of their identity. Not everyone is gay, black, female, or indigenous, but anyone can be a Zapatista, a black bloc member, or Guy Fawkes, according to these groups. Anyone can wear a mask and participate in the struggle against neoliberalism. (This is one of the many differences between radical Left and right wing masked groups. The KKK’s identity and membership, for example, are explicitly exclusionary: not everyone can be a member of the white race or wear the hood).

3. The mask supports direct democracy and egalitarianism. Instead of voting for representatives and creating parties, these masked groups have all tried to create institutions of direct democracy. All of these groups use consensus decision-making, which aims to satisfy everyone’s needs, instead of majoritarian decision-making that excludes the needs of the minority. The wearing of masks facilitates this by creating an anonymous collective political agency where, as Subcomandante Marcos says, “the mistakes are conjugated in the first person singular and the achievements in the third person plural.” Everyone, regardless of identity, can participate in the General Assembly. Identity politics and differing ideologies are not rejected but are parts of “a world in which many worlds fit,” as the Zapatistas say.

The wearing of masks also attempts to undermine hierarchy and authoritarianism by eliminating markers of authority, including faces, within these movements. Watching hundreds of Guy Fawkes’ march on Washington, one cannot distinguish who is in charge — because no one is, because everyone is. Unlike the hierarchically ranked masks of right wing groups, the unranked masks of recent Left movements help establish an egalitarian anonymity without leaders or followers.

Thomas Nail is an assistant professor of philosophy at the University of Denver.  He is the author of “Returning to Revolution: Deleuze, Guattari and Zapatismo.”