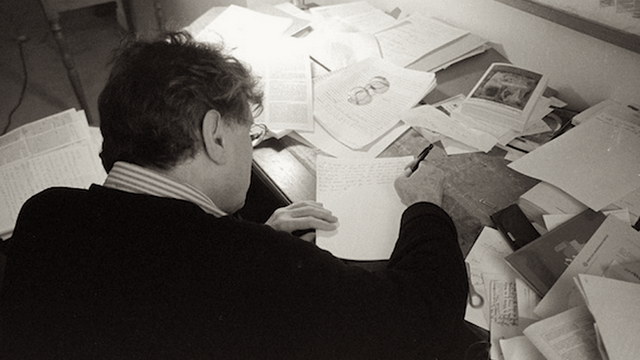 Gilles Deleuze wasn’t the only one in the D&G duo to have a passion for film.  It turns out Felix Guattari wrote a sci-fi screenplay in the 1980s. It’s titled “Un amour d’UIQ,” (Love of UIQ) starring a ‘machinic subjectivity’ named Universe Infra-Quark (UIQ).  While Guattari finished the screenplay, the movie was never made. Guattari had reached out to “Taxi Driver

” producer Michael Phillips to make the movie, but it was rejected by studios.

Don’t despair! There is a movie about the making of the movie. Meta. It’s called “In Search of UIQ” by French filmmakers Graeme Thomson and Silvia Maglioni. According to Frieze Magazine:

In the absence of any extant film footage, In Search of UIQ endeavours to not only reconstruct Guattari’s aborted attempt at filmmaking – with voice-overs from the script and Guattari himself, protracted sequences on computer screens and a noir-ish procedural on other recent UIQ-inspired productions – but to meditate on the political, social and cinematic milieu of the late 1970s through the mid-80s, when the possibilities of financing and realizing such an abstruse film on an international level were deemed feasible.

The UIQ in question – an acronym for Univers Infra-Quark – is, according to Guattari in notes on the script ‘a machinic subjectivity – hyper-intelligent and yet infantile and regressive […] that has no fixed limits and no clear psychological or sexual orientation.’ Tutored in the ways of mankind by a German punk dj named Janice, the bodiless UIQ begins to experience its first human emotions – love and jealousy – and tries desperately to ‘facialize’ or interface itself through screens and other earthbound avatars, resulting in horrific mutations across the world. After Janice agrees to be injected directly with UIQ and fuse into a kind of matrimonial cyborg, she jumps to her death, only to realize that UIQ has made her immortal. In its determination to possess her, UIQ has forestalled Janice’s last option for freedom – her own demise.

“In Search of UIQ” premiered Feb. 2013 in Los Angeles. There is currently no word on if and when the documentary will be available in other theaters or sold for personal viewing (that we could find)

Guattari enthusiast should be hopeful though, because would-be producer Michael Phillips seems eager to sell the screenplay.

In one of the documentary’s most memorable sequences, Thomson cold-calls Phillips and asks him of his recollections of UIQ, only to be thrust into an unsolicited negotiation for the original screenplay.

It can be yours for the low price of, well, probably hundreds of thousands of dollars. Who knows.

Know anything else about the documentary or the Guattari screenplay? Let us know in the comments!