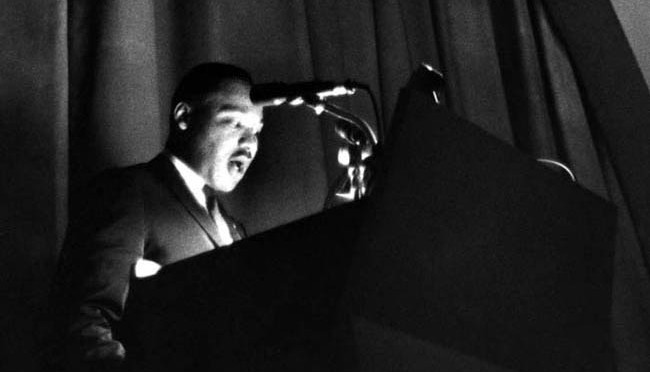 A recent recording of a question and answer session held at the New School for Social Research with Martin Luther King Jr. has recently surfaced.

The New School for Social Research, a bastion of hipster (white) commies, sports an impressive history when it comes to critical theory. Hannah Arendt, John Dewey, James Baldwin, W.E.B Dubois, and that kid from “The Social Network” are just some the New School’s former faculty and students.

King was a speaker as part of a series of talks on the “American Race Crisis” held in 1964. The recording below contains the 15 minute question and answer between Dr. King and attendees. Dr. King makes a case for affirmative action, citing the example of Untouchables in India, and discusses the intersection of the struggle of poor whites with poor people of color, noting “I think the problem of poverty must be dealt with beyond racial lines.”

King also takes a jab at his contemporaries in the Black Muslim movement, which included activists such as Malcolm X (who later left the Nation of Islam). When asked about the movement, King replied that the movement may be considered as a positive only insofar as the negative reaction to it. King notes:

“They think of me as a pretty bad fella’ down in Georgia and Alabama and Mississippi, and say a lot of bad things about me. But even I have become a little more respectable when they discovered some of the ideals of the Muslim movement.”