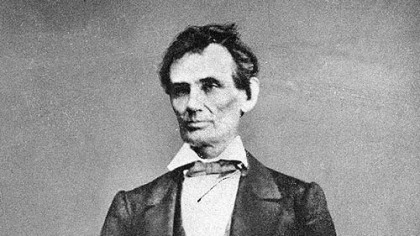 Karl Marx invented communism. Sort of. Abraham Lincoln freed the slaves (not because he actually thought blacks were equal to whites, but because he thought “live and let live, right bro?”). So what the hell were these two writing to each other about? Apparently slavery, and how it sucked.

I first stumbled upon this letter from Karl Marx (on behalf of the International Working Men’s Association) congratulating Lincoln on his re-election. Marx  acknowledges that working white folks have been pretty shitty to black slaves and that laborers everywhere should unite on behalf of the battle over slavery. He writes:

While the workingmen, the true political powers of the North, allowed slavery to defile their own republic, while before the Negro, mastered and sold without his concurrence, they boasted it the highest prerogative of the white-skinned laborer to sell himself and choose his own master, they were unable to attain the true freedom of labor, or to support their European brethren in their struggle for emancipation; but this barrier to progress has been swept off by the red sea of civil war.

The workingmen of Europe feel sure that, as the American War of Independence initiated a new era of ascendancy for the middle class, so the American Antislavery War will do for the working classes.

And thank god the North won, because Europe was really missing their cotton. Marx tells Lincoln that the laborers in Europe have been patiently waiting out the “hardships imposed upon them by the cotton crisis” in support of their enslaved comrades.

The best part? Lincoln replied, or at least his ambassador in London did (where Marx was located). The reply doesn’t say much, other than conveying a generic sense of gratitude and agreeing slavery is bad:

So far as the sentiments expressed by it are personal, they are accepted by him with a sincere and anxious desire that he may be able to prove himself not unworthy of the confidence which has been recently extended to him by his fellow citizens and by so many of the friends of humanity and progress throughout the world.

You can find the whole exchange here from Marxists.org. There is also an entire book, “An Unfinished Revolution,” about Marx’s and Lincoln’s letter exchanges. Whether or not the book encompasses more than these 2 letters is vague. The description reads.

Karl Marx and Abraham Lincoln exchanged letters at the end of the Civil War, with Marx writing on behalf of the International Working Men’s Association. Although they were divided by far more than the Atlantic Ocean, they agreed on the urgency of suppressing slavery and the cause of “free labor.” In his introduction Robin Blackburn argues that Lincoln’s response to the IWA was a sign of the importance of the German American community as well as of the role of the International in opposing European recognition of the Confederacy.