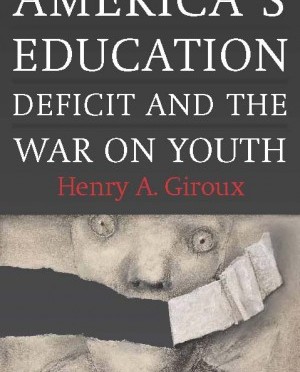 Henry Giroux has spent most of his academic career making one poignant point: the world is doomed as long as neoliberalism continues to encroach on our education system. His latest book “America’s Education: Deficit and the War on Youth,” makes no exception. In a series of essays, Giroux tackles the militarization/neoliberalization of our school system and the culture of ignorance and cruelty it breeds.

Giroux centers education in the battle against a  society that promotes rampant individualism and the dissolution of community bonds in the face of historic inequality, poverty and incarceration.

The education system is increasingly focused on the production of complacent consumers and workers. The banning of “critical thinking” in Texas schools is but a microcosm in the overall erosion of America’s education system. Our intellectual culture is  dominated by corporate sponsored thinkers like Malcolm Gladwell, who Giroux argues, have become a (quoting Yasha Levine) “one-man branding and distribution pipeline for valuable corporate messages, constructed on the public’s gullibility.”

So what do we do when our intellectual culture is dominated by comic-book homages to that guy who wore turtlenecks and sold us trendy gadgets built in factories where people routinely kill themselves?

For one, we could end the fusion of the prison industrial complex with our school system that Giroux noted is increasingly concerned with charging kids with misdemeanors than actual education. And in Texas, the zero point of American fascism, police gave 300,000 “Class C misdemeanor” tickets to children as young as 6 according to Giroux. This school-to-prison pipeline is heavily racialized, with increased police presence in urban schools making it easier for people of color to be labeled as criminals before even graduating high school.

Drawing on the pedagogy of Paulo Freiere, Giroux argues that education should be centered around fostering democratic citizenship. But not the kind that asks us to cast a ballot and watch CNN.  Giroux calls for a re-invigoration of public spaces, discourses, and imaginations. As neoliberalism steals away our communities and public spaces, he argues that movements like Occupy Wall Street are crucial to building public spaces that foster a healthy skepticism of the status quo.

Politics as an act of translation between theory and practice is essential to the struggle against the coming darkness that brands critical judgement as an enemy of the state and destroys the spaces and opportunities for public dissent, paving the way for existing elements of authoritarianism to crystallize into new forms that further deform language and make “despair inevitable”

The book reads like whirlwind attack on everything wrong in the world. Phrases like turbo capitalism, casino capitalism, culture of cruelty and suicide state are rattled off in quick succession to illustrate the shitstorm that is neoliberalism.

But that’s not necessarily a bad thing. Giroux’s catch-phrases give readers something to latch onto, and they also fuel my infantile humor (basically a win-win).

Giroux offers a compelling primer for the chaos that neoliberalism has wrought on our youth and education system. Giroux writes with passion that borders on poetic. And, unlike a lot of critical theory, the book is intelligible and easy to read. It would make a welcome addition any OWS-style people’s library or intro-level college class.

That being said, a reader familiar with Giroux’s previous books and essays in Truthout (which, by the way, are awesome) might find this book lacking in new ideas and content. Still, Giroux’s writing style makes the book an enjoyable read. At the very least, aspiring critical theorists could take notes on Giroux’s phenomenal writing style.

“America’s Education: Deficit and the Way on Youth” is available now from Monthly Review Press. You can find it on Amazon here.