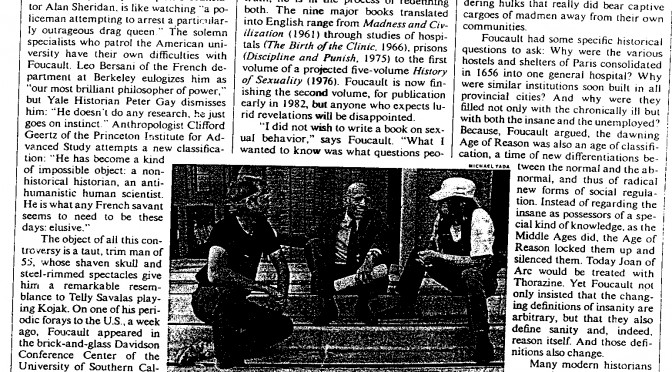 “‘M. Foucault,” wrote one irritated colleague, ‘races through three centuries at full speed, like a barbarian horseman. He sets fire to the steppe without caution.'”

An amazing profile of Michel Foucault that appeared in Time Magazine in November, 1981 recounts the life and work of the theorists nearly three years before his death. It was recently discovered to be freely available online by Stuart Elden on his blog Progressive Geographies.

“He doesn’t do any research, he just goes on instinct,” Yale historian Peter Gay complained to Time.  A humorous claim, considering Foucault spent most of his waking hours in the France’s national library.

“If I wished to be a historian in the present sense of the word,” Foucault responded, “that would not be difficult, but it would be better to ask why I have done what I have done. This problem, say, of locking up the mentally ill– did historians bring it up? No, it was necessary for a ‘twisted’ person to have the bad idea of introducing the questions at once personal and political. But historians always take their problems for the present. If it is not from the immediacy of their personal lives, or the political and social life of their country, it is simply from their university environment.”

Foucault also recounts his study of psychology and internship at a mental hospital in Paris. “I felt very close to and not very different from the inmates,” he told Time. “I was also uneasy about the profession of medicine. It was there that the question was planted: What is medical power? What is the authority that permits it?”

Foucault, it should be noted, was a homosexual during a time where it was still considered a mental illness. That he should have felt at ease around inmates of the mental hospital should not be surprising.

His homosexuality also put him in conflict with the Communist Party, to which he was briefly a member.

“I was never really integrated into the Communist Party because I was homosexual, and it was an institution that reinforced all the values of the most traditional bourgeois life.”

Time also quotes Edward Said and Richard Rorty, whose criticisms of Foucault are more insightful than the usual accusations of laziness.

Edward Said noted, “Foucault has never been able to explain historical change, how things get done. There is also no role in his scheme for such things as justice, freedom, beauty, those positive ideals.”

Richard Rorty added, “His obviously sincere attempts to make philosophical thinking be of some use is not going to get anywhere unless he… can join the bourgeois liberals he despises in speculating where we go from here.”

Foucault responds by positing a cultural divide: “Among the reasons it is truly difficult to have a dialogue with the Americans and English is that for them the critical question is for the philosopher is, ‘Is it true?’ whereas the German-French tradition consists of basically of posing the question ‘Why do we think what we do? What effect does it have?’ I consider the problems that I have I pose to be those of modern man.”