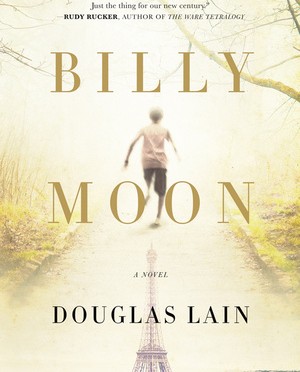 The following review has been republished and slightly modified, with permission, from a review written for “With Sober Senses,” a publication of the Marxist-Humanist Initiative.

Doug Lain’s “Billy Moon” centers on the French revolt of May 1968, and its many expressions of ideas that shaped my generation of radicals. This is Doug Lain’s first novel, and he has done a wonderful job of weaving many of the theoretical tendencies of that day and today, some of which he discusses regularly on his podcasts, into a fast-moving, funny, sly story.

“Billy Moon” is the nickname of the fictionalized son of A.A. Milne, author of the “Winnie the Pooh” books. This Christopher Robin and the novel’s other major characters participate in May ‘68; before and during the revolt, they encounter and express many of the social critiques and revolutionary ideas of that period, both Marxist and other left tendencies spawned in the post-World War II era.

Names are dropped and dialogues imagined. Yet more subtle references go unnamed, so that it becomes a bit of a game to spot and identify them. There is not a dull moment in the reading! We are plunged into ideas articulated (sort of) by Winnie the Pooh, Francoise Sagan (whose novel “Bonjour Tristesse” thrilled students in the 1950s and 60s with its hedonistic sex and girl-power), and Guy Debord, to name just a few major threads of the book. This review would be overly long if I discussed all the tendencies on the scene in 1968 and tried to name all Lain’s references (and I’m not the kind of reviewer who tries to upstage the author about his subject). Suffice it to give you a leg up on Debord, the French social theorist who founded the Situationist International, a left intellectual tendency in art and politics that was prominent in the French revolt. His best-known work is Society of the Spectacle, which argues that all aspects of our lives are dominated by images which subsume all other forms of domination. He advocated “détournement”—“derailing” writings and art by twisting them into new works, reinventing them­­­­––and that is the name of the student contingent in which the novel’s characters participate during the revolt.

At the start of the book, Christopher Robin Milne is a quiet English bookstore owner who is haunted by his father’s fanciful depiction of him as a child in the world-famous Pooh books, and is also haunted by presumably harrowing experiences in the army in World War II.  Apparently as a result, he keeps having surreal encounters with stuffed toy animals. The parallel story of Gerrard, a French university student who participates in the start of the 1968 revolt in Nanterre and then summons Chris to Paris to join the revolt, also involves surreal experiences and father issues.

The story centers around the characters’ quests to define themselves as they wish to be and not as they were made to be by parents, teachers, and peers. Gerrard hopes to “derail” Chris. During the revolt, the two men, along with Chris’ wife and child and Gerrard’s girlfriend, do develop into freer selves, but not completed selves. They develop in the course of throwing cobblestones at cops, picketing with striking workers, and painting fractured posters. And re-inventing Pooh-bear.

Although not stated, the novel seems by implication to critique May ‘68 for the limitations of the ideas that were debated or assumed, and perhaps also to critique Occupy Wall Street’s actions two years ago: the fictitious characters’ discussions and slogans during the French revolt resemble many we heard in OWS. Except that the French students knew enough Marx to ally with workers’ movements immediately and to understand somethings about capitalism and the futility of pretending it doesn’t dominate you. May ’68 quickly became a general strike of the working class, aided by the students, and nearly won political power—a far cry from OWS’s attempted alliances with union bureaucrats and its absurd call for a general strike on May 1 of last year.

But a little Marxism was not sufficient to sustain the French revolt. The novel presents the iconic student leader Daniel Cohen-Bendit as a self-aggrandizing blow-hard. Debord comes off no better: he drinks and flirts all day in the café, even after students who followed his ideas are killed. The characters talk in short-hand; they observe and espouse ideas but do not delve into them. We are told that huge student assemblies and mass strikes were ongoing during the revolt, but we hear none of those discussions. And when the revolt is defeated, the survivors are left to struggle on their own.

Christopher’s wife Abby sums up the situation with reference to the popular slogan, “Underneath the cobblestones, the beach” (a slogan recently revived in discussions of reshaping urban space). Abby tells Chris that the ’68 radicals have misunderstood it by thinking the slogan implies that freedom could be found immediately through spontaneous collective action in the streets, by thinking that “They just had to remove the cobblestones.”

“‘They wanted the beach. They wanted a seaside vacation and Brigitte Bardot in a bikini. They wanted to make a revolution based only on freedom and pleasure,’ Abby said. ‘But there was something else. There is another way to interpret the word ‘beach.’”

“‘Christopher, a beach is what one storms. What’s underneath the cobblestones is not Bardot’s beach, but a beachhead.’”

I don’t know if Lain intended this book to illustrate the philosophic concept of “second negativity,” but this passage does so nicely. The students were focused on the “first negation” of overthrowing the old order, and failed to realize that the struggle to create a new society is even more difficult. They started to establish a beachhead from which to re-make the world, but when they failed to topple the government, they stopped dead.

Again, I don’t know Lain’s intention, but for me, his book is a criticism of the students’ superficial embrace of Marxist and Situationist concepts. The students attempt to live out the slogans of the revolt, but they disregard actually working out the theory needed to move revolt further ahead. They believed, as the real Cohen-Bendit put it, they could “catch theory en route.”

In the novel, it’s one damn thing after another: the revolt breaks out, the workers strike, there is state repression and betrayal by the Communist-dominated union federation, the revolt is defeated. Might there also have been another reason for the revolt stopping dead:  lack of an internal process to develop its direction? What happened to the ideas in contention during the revolt?

I am reminded of Raya Dunayevskaya’s criticism of France ’68 at the time, when its defeat led many to call for still more activism, but only she called for working out Marx’s theory concretely for our age. Marx’s philosophy of revolution, she espoused, was the missing ingredient in all the twentieth century revolutions. These concepts have been the focus of recent Marxist Humanist Initiative‘s investigation of the mass movements of the past half-century; see “Why Do Popular Movements Vanish? And Do They Have To?”   MHI intends to further develop the idea that collective reflection and reorganization of thought are key to the process of “second negativity,” and that process is vital for mass movements to begin anew and to move forward. Our readers are welcome to join this discussion.

Meanwhile, Billy Moon, his family, and the surviving French characters remain in the realms of sur-reality and personal struggles. This funny book is actually a very sad one.

It is lots of fun to read nonetheless! I enjoyed this book enormously.

You can also listen to Doug discuss the book at Bluestocking in NYC here.