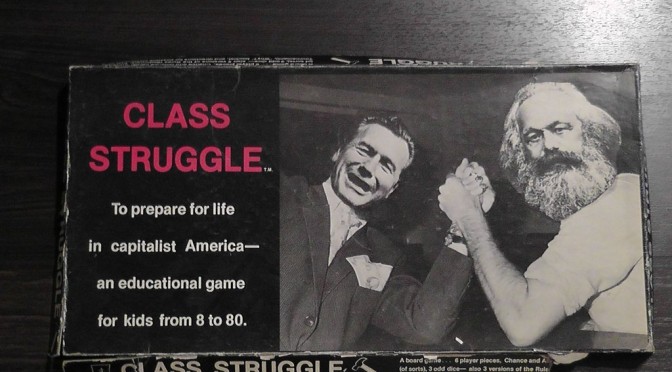 When this first popped on Reddit, I was positive it was a fake, yet hilarious, photoshop job.

But Class Struggle is a real board game, released in 1978 by NYU professor Bertel Ollman. It was even translated into multiple languages, including Spanish and German.

Besides Class Struggle, Ollman has a number of notable accomplishments. First, looking awesome. Second, he was Sean Hannity’s professor at NYU. Hannity accused Ollman of giving him a poor grade at NYU for being a conservative, a claim Ollman rebuked on Fox New’s “Hannity & Colmes.”

Class Struggle was published by board game maker Avalon Hill. In the game, according to Board Game Geek, “the Workers move around a board while trying to survive against the Capitalist who control everything. As the Workers unite they take power from the Capitalist players but if they do not succeed in uniting the Capitalist will win.”

Many of the rules are just like real life capitalism: you don’t get to pick what class you play as, and if you’re one of the lower classes, sucks for you. Capitalists get to roll first and decide the turn order of the game.

The game is now hard to find, and one copy on Ebay is currently going for over a hundred dollars. A copy is on sale on Amazon for $177 as well.

You can read the rules here, and check out more pictures below or.