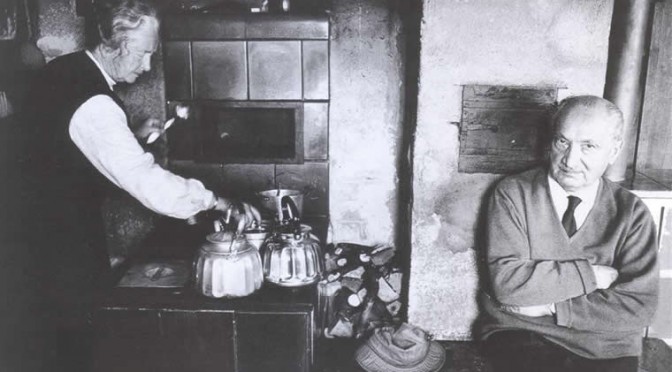 The philosophy world has been abuzz with talks of Martin Heidegger’s “Black Notebooks,” a collection of Heidegger’s personal writing that has remained sealed until their publication in Germany in 2014. Since their release in German, the Notebooks have fueled heated debates about Heidegger’s ties to the Nazi Party, and even led the chairman of the Martin Heidegger Society to relinquish his position. In question are passages that reek of Nazi-era anti-Semitism that arguably inform the philosopher’s entire intellectual project.

The Considerations (Überlegungen), also known collectively as the “Black Notebooks,” have philosophers pondering if one’s work can truly be separated from its creator. Some say Heidegger’s philosophical pursuits are directly linked with his anti-Semitism while others argue that there is nothing directly correlating his immense contribution to modern thinking with his political ties to the National Socialist Party.

Baudrillard foresaw this kind of portrayal in his “Necrospective around Martin Heidegger,” where he said, “All this is a desperate emotional response to the realization that the events in question are currently eluding us at the level of reality. The Heidegger affair, the Barbie trial etc. are the pathetic little convulsions produced by the loss of reality that afflicts us today.”

But what are the passages in question? Already, Philip Otterman has posted some quotes in The Guardian where Heidegger’s references to “World Jewry” are highlighted. But after looking around for more translations, I was directed to a paper presented by Richard Polt, who currently resides on the executive committee of the Heidegger Circle, that was presented at the “Black Notebooks” conference hosted by Emory University. After contacting Polt, he agreed to let these previously untranslated excerpts run on Critical-Theory.

Polt said to not take his translations as holy writ, because “the German is awkward and I am not 100% sure what Heidegger meant.” According to Baudrillard, it’s probable that no one does. See for yourself.

“One of the most secret forms of the gigantic, and perhaps the oldest, is the tenacious skillfulness in calculating, hustling, and intermingling through which the worldlessness of Jewry is grounded” GA 95: 97 (Überlegungen VIII, 5).

The words Heidegger uses to describe the Jew, “calculating, hustling,” are lazy stereotypes that many people outside of Germany also used (and still use) to spit venom toward Jews. I think Mel Gibson shares the same outlook. But what ties anti-Semitism to Heidegger’s work, and is also quite damning, is the phrase “worldlessness of Jewry.”

Being-in-the-world (In-der-Welt-sein) is the basic activity of human existing. To say that the Jews are “worldless,” or that their world is grounded in scheming, is more than a confused stereotype, given Heidegger’s various conceptions of world and the centrality of the concept in his existential analytic of Dasein. What is it to be worldless, to lack a history, to have no right to a place or a where in the world? What is it to say that an entire people are without this or don’t deserve this or worse, are incapable of owning this? Heidegger here is dehumanizing, or de-Dasein-ing, the Jewish people.

“To appropriate ‘culture’ as a means of power and thus to assert oneself and affect a superiority is at bottom Jewish behavior. What follows from this for cultural politics as such?” GA 95: 326 (Überlegungen X, 48)

Here it is possible to draw a direct line to confused National Socialist Propaganda. It’s the delusion that the Eastern Jew will migrate west and destroy Germany’s perceived greatness, which for Heidegger was grounded in the possibility of Germany becoming a new Greek polis[1].

The word culture in scare quotes tells us what Heidegger believes about Jews, that like their “world,” their culture is also lost, anti-historical, ungrounded, and has no rightful place in Germany. Jewish culture contaminates “Germany’s spirit,” and he therefore detached from it.

This has been substantiated through his behavior as rector of the University of Freiburg. Paradoxically, Heidegger helped some of his Jewish students emigrate from Germany and wrote appeals to keep Jewish professors on the faculty while he also cut ties with Arendt and several other Jewish students, like Karl Jaspers. Edmund Husserl—a Jew, his mentor, and whom he dedicated Being and Time to—was forced to leave his post as rector and Heidegger took over the position[2]. Heidegger sent a bouquet of flowers for what Husserl declared as the, “supreme affront” of his life: ‘mandatory’ removal from the university[3].

Safranski’s thesis on Heidegger’s anti-Semitism as rector is that his “Nazism was decisionist.” He was not a Nazi “in the sense of the ideological lunacy of Nazism.” This sums up his involvement with Nazism as, more or less, a career move—to whip the German University into shape. Does this make it any better or worse?

“What is happening now is the end of the history of the great inception of Occidental humanity, in which inception humanity was called to the guardianship of be-ing, only to transform this calling right away into the pretension to re-present beings in their machinational unessence…

In the historyless, that which belongs together only within it also comes most readily into the unity of complete mixture; apparent construction and renovation, and complete destruction—both are the same—the groundless—what has succumbed to mere beings and is alienated from be-ing. As soon as the historyless has ‘set in,’ ‘historicism’ begins to run rampant; the groundless, in the most diverse and contradictory forms, falls—without recognizing itself as having the same unessence—into the most extreme enmity and craving for destruction…

And maybe in this ‘struggle’— which struggles over goallessness itself and which hence can be only the caricature of “struggle”—the greater groundlessness will ‘triumph,’ which is bound to nothing and makes everything serviceable to itself (Jewry). But the authentic triumph, the triumph of history over the historyless, is won only where the groundless excludes itself because it does not venture be-ing, but instead always merely calculates with beings, and posits its calculations as what is real.” GA 95: 96-97 (Überlegungen VIII, 4) (all GA 95 entries date from 1938-39).

Machination, according to Polt’s glossary, is a “fundamental trait of modernity.” The problem Heidegger has with this is best exemplified in The Question Concerning Technology (1977). What happens to beings under modernity, natural scientific inquiry, and technological machinery, reduces the human to the calculable, the manipulatable, or what he liked to call: standing reserve. In this vein, perhaps Heidegger sees Jews as propagating the ‘machinational unessence’ of beings, destroying the “wondrousness” of being.

In the second paragraph, once again, Heidegger is alluding to the Jew’s anti-Dasein. Jews are not being, but merely “calculate with beings,” likely another symptom of their anti-historical modernity.

While reading Being and Time (1927) there are many empowering and liberating moments: confronting nothingness, the fear of life, and living authentically despite the inevitably of death. So why his obsession with being grounded in history and culture, the things we see people “fall” into—losing themselves in a world of masks with nothing behind them? The answer is unclear, and open to discussion.