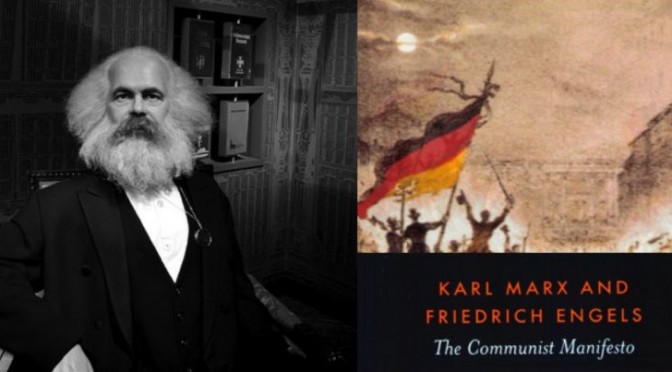 The following article was originally published on Pieria.co.uk as “The Many Straw Men Surrounding Marx,” by Unlearning Economics. We have re-published it verbatim, with permission. Be sure to go like Pieria on Facebook.

Every school of thought likes to claim that the other schools of thought misunderstand or misinterpret them, and hence that their criticisms miss the mark by attacking a ‘straw man‘. Sadly, it is often true that this is the case, and I am guilty of misinterpreting my opponents on many occasions. However, in my opinion, there is little contest for the most frequently misrepresented figure around: it has to be Karl Marx.

For many, Marxist theories should be laid to rest. His labour theory of value is often referred to as “discredited”, superseded by the subjective theory of value, while historical materialism and its lofty ideals about changing human nature are held to be equally fallacious. His purported views on colonialism (and their Leninist children), while not entirely wrong, are held to be incomplete as they fail to include non-capitalist instances of these phenomena. Finally, his historical ideas about the ‘inevitable’ overthrow of class war and victory of socialism are seen as naive and deterministic, and, to a degree, ethnocentric.

However, as I will show, such crude caricatures have been around for over a century, and were often repudiated by Marx (and his collaborator, Friedrich Engels) themselves.

The Labour Theory of Value (LTV) states that the “value” of a commodity is determined by the “socially necessary labour time” embodied in it (“socially necessary” to avoid the nonsensical idea that somebody who makes something slowly will contribute more value than somebody who makes the same thing, but faster). To the extent that ‘capital’ (machines, raw materials etc) contribute toward this value, it is only in the necessary labour time required to produce that capital. Hence, only labour can ‘add’ value, and therefore surplus is produced by workers, while capitalists are parasitic, receiving profit only because they pay their workers less than the workers produce.

Now, contrary to what many – including some Marxists – insist, the LTV is not a theory of price. Sure, thinkers from Adam Smith to David Ricardo, and to a certain extent Marx himself (at least initially), tried to work it out as such. But the finished product, as espoused by Marx and Hegel, had nothing to do with price. Instead, it was a theory of the total value in capitalist economies: where the surplus came from (exploitation) and how the changes in the production of this surplus would manifest themselves (periodic crises). Marx made this much clear in a response to critic, who charged that his theory of value was erroneous because prices are also a function of demand:

“What has this to do with my theory of value? To the degree that corn is sold above its value, other commodities…are, to the same degree, sold below their value. The sum of values remains the same.”

Hence, the theory can only predict the total value produced in a capitalist economy, while individual prices can vary based on monopoly, demand or whatever else. This is what led Eugene Bohm-Bahwerk to call Marx’s theory “tautological”; similarly, philosopher Karl Popper famously argued that such statements made Marxism unfalsifiable.

However, there is a clear criterion for testing Marx’s theory: the declining rate of profit. If there is observed a short term tendency of the rate of profit to fall – due to capitalists substituting capital for labour, hence reducing their surplus per unit of cost – manifesting itself in periodic crises, this is consistent with Marx’s theory. If not; if, say, the rate of profit increases before recessions, this would falsify the theory. To paraphrase commenter Hedlund, if we cut through the nonsense and merely ask the question “is what Marx called value, itself a function of necessary labour time, the major parameter underlying the motion of the economy?” then we have an empirical inquiry, and can dispense with the metaphysical confusion, at least for the purposes of science. For those interested, the Marxist economist Andrew Kliman has taken up this challenge.

It is commonly thought that Marxist theories of colonialism and imperialism argue these things are uniquely capitalist phenomena, and hence that the numerous instances of non-capitalist countries engaging in them serve to blow a massive hole in the theory. For example, economist Joseph Schumpeter, in many ways an admirer of Marx, argued it was “absurd” to make “both monopoly and conquest specific properties of latter-day capitalism”.

Yet nothing in Marxism says that to be aggressive, colonialist or imperialist, a country must be capitalist. In fact, as Vladimir Lenin pointed out in Imperialism: the Highest Stage of Capitalism:

The question for Marxists and Leninists is whether colonialism and imperialism are linked to, and are necessary components of, capitalism. Marx argued that if capitalism came into contact with primitive, traditional production structures, it would necessarily upend them in the interests of creating a workforce: the process of ‘primitive accumulation‘. This could occur both domestically – such as the foreclosure movements – or in foreign lands, such as the numerous horrors in the British and other European colonies. The Marxist argument is that the growth of capitalism necessarily results in the subsuming of all other production methods, manifesting itself in colonialism, rather than that any sort of conquest or occupation is necessarily a result of capitalism.

Historical Materialism and Determinism
In 1859, a reviewer of Marx’s Capital charged that:

If, as historical materialism charges, the characteristics of both people and society are determined by objective economic factors, then society will move in a certain direction, driven by these factors, regardless of whatever else happens.Yet Marx always recognised the absurdity of such ideas, deprived as they were of historical specificity and, crucially, human agency:”The materialist doctrine concerning the changing of circumstances and upbringing forgets that circumstances are changed by men and that it is essential to educate the educator himself. This doctrine must, therefore, divide society into two parts, one of which is superior to society [i.e. is not also a product of society, the educator].”

Hence materialism must be interpreted weakly, else it is refuted by its own existence!

Marx did claim that economic forces are a fundamental factor in shaping society: after all, his theory of history puts class struggle, itself a product of the relations of production, at centre stage – he famously began The Communist Manifesto by declaring that “the history of all hitherto existing society is the history of class struggles.” However, Engels warned against interpreting claims like this too strongly, saying that it “transforms [our] proposition into a meaningless, abstract, senseless phrase”. In fact, Marx’s materialism merely makes the claim that the economic relationships of production are a major factor in determining the characteristics of a society, not that they are the only one.

It is also true that Marx argued that there were distinctive, progressive ‘stages’ of society: first primitive communism, then slavery, then feudalism, then capitalism, then socialism, and finally ‘advanced’ communism. And interpreted superficially, this conception sparks some immediate, obvious rejoinders: surely society can regress, different modes can exist side by side, different paths can be taken, and the ‘victory’ of communism is not guaranteed? But again, Marx specifically emphasised that his ‘stages’ were not:

“an historico-philosophic theory of the [general path] imposed by fate upon every people, whatever the historic circumstances in which it finds itself, in order that it may ultimately arrive at the form of economy which will ensure, together with the greatest expansion of the productive powers of social labour, the most complete development of man”

Instead, he was simply describing the conditions of capitalism as it had actually developed, starting in Western Europe. Hence, his arguments, as always, were contingent on specific historical circumstances. The possibility of capitalism transforming not into socialism but into barbarism, or initially having developed another way entirely, is completely dependent on how history plays out.

Conclusion
It would not be ridiculous to suggest that much of the animosity toward Marx stems from a retrospective view of “what his ideas looked like when put in practice”, and the perceived failure of his ideas after the fall of the Berlin Wall. This much was evident in Benedict Brogan’s recent discussion of Ralph Miliband and the Cold War (refuted by Chris Dillow). In retrospect, Marx’s militant calls for communists to engage in “propaganda” (which only really gained a bad reputation as a word due to the Nazis’ use of it against the Jews) seem naturally extreme. Similarly, the mistreatment of “upper class” peasants in the USSR can seemingly be linked to Marx’s call for the destruction and abolition of private property, despite his statement that “the property of petty artisan and of the small peasant…there is no need to abolish that”.

In any case, Joan Robinson put it best when she said that reading Marx for herself revealed “a great deal that neither its followers nor its opponents had prepared me to expect.” Once you sweep through the caricatures and interpret Marx charitably, there is a great deal worthwhile to be found in his work.