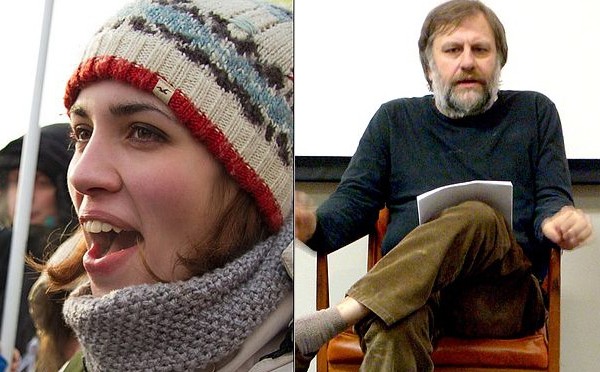 A letter exchange recently published by The Guardian between Slavoj Zizek and Nadezhda Tolokonnikova gives insight into the role critical theory has played in the punk rocker’s activism.

In March, 2012, Tolokonnikova and two other Pussy Riot members were arrested after staging a protest in a Russian Orthodox church. The members of the band sang, danced, and urged the Virgin Mary to get rid of Vladimir Putin and become a feminist.

Before her arrest, Tolokonnikov was a philosophy student in Moscow. She was sentenced in August, 2012 to two years imprisonment for raging against the machine.

In a series of letters from January to July, 2013, Zizek and Tolokonnikov talk philosophy and the current state of capitalism. Tolokonnikov notes she was obsessed with advertising as a child, wanting to make a career out of it. She liberally quotes Nietzsche and Marx, writing to Zizek that “we are the children of Dionysus, sailing in a barrel and not recognising any authority.”

She continues to rail against capitalism with her interlocutor, citing Brian Massumi’s contention that “capitalism has already overcome the logic of totalising normality and adopted the logic of erratic excess.”

Zizek notes that truly disturbing aspect of Pussy Riot “to the liberal gaze is that [they] make visible the hidden continuity between Stalinism and contemporary global capitalism.” He later writes,

For me, the true task of radical emancipatory movements is not just to shake things out of their complacent inertia, but to change the very co-ordinates of social reality so that, when things return to normal, there will be a new, more satisfying, “apollonian statics”. And, even more crucially, how does today’s global capitalism enter this scheme?

He apologizes, in a later letter, for his philosophical rambling:

But I feel guilty writing this: who am I to explode in such narcissistic theoretical outbursts when you are exposed to very real deprivations? So please, if you can and want, do let me know about your situation in prison: about your daily rhythm, about the little private rituals that make it easier to survive, about how much time you have to read and write, about how other prisoners and guards treat you, about your contact with your child … true heroism resides in these seemingly small ways of organising one’s life in order to survive in crazy times without losing dignity.

While The Guardian’s correspondence start in January, 2013, earlier letters allegedly written by Zizek and Tolokonnikova were posted to a Pussy Riot fan site. In a letter dated August, 2012, Tolokonnikova thanks Zizek for his public support, writing:

We received the news that you have been supporting us in every way – in theory and in practice. You are awesome! This has proven to be the continuation of the political liberation miracle-movement, whose birth for us now is unbelievable. I love miracles and their idiosyncracies. All of our activity is full of wonder.
The inmates are learning ‘about the violence’.

Thanks for everything!
Good luck to all.
Nadya
23 August 2012

See the full letter correspondence at The Guardian.