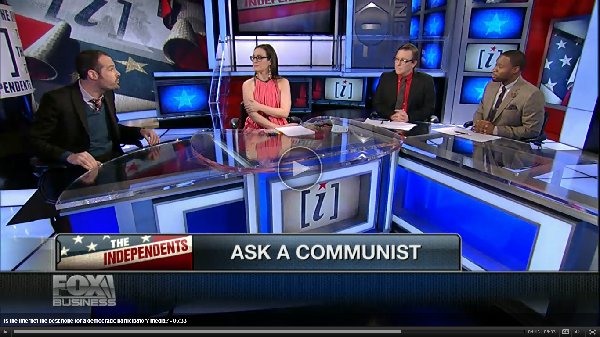 Last night, Fox Business decided to have a “fair and balanced” debate with a Communist on their show, “The Independents.” And for once, it wasn’t a Democrat they paraded as a Communist. It was a “real life” Communist, if you will.

I prepared myself for the wave of rage that would soon pass over me as Fox paraded out some Communist straw-man equivalent of Alan Colmes. And then, nothing. Well, not nothing.

What ensued was a mostly civil debate between a Communist, some libertarians and a former MTV VJ.

The Commie in question is Jesse A. Myerson, an articulate Occupy supporter who rebuts the Fox Business talking heads for trying to detach the slavery boom in America from its capitalist roots and incorrectly pin him with the crimes of everything shitty other Communists have done.