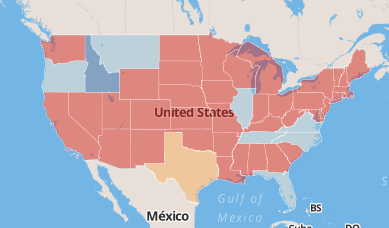 You would think that a state that outlawed sodomy until 10 years ago and leads the country in executions and owning guns would have a pretty laissez-faire attitude towards aerial unmanned drones. You might also think that the American Northeast, full of Massachusetts liberals and Stalinistas in New York who are trying to take away your god-given right to diabetes would, like all other things, want to heavily regulate them.

Mother Jones recently published a map showing state-by-state regulation of UAVs. The drones, after years of reigning death on the Middle East, are now items of interest for increasingly militarized police forces and even certain civilians.

In the map above, fully available (and interactive) here, states with no laws or regulations on drone usage are colored in red. State that restrict civilian usage are beige (only Texas). Light blue indicated states that restrict police usage, and dark blue restricts both civilian and police usage.

According to Mother Jones,

While drones were never banned in the United States, up until now their use has been strictly limited, with the FAA distributing a few hundred permits to researchers and law enforcement. But Congress has ordered the agency to open commercial airspace to a wide variety of unmanned vehicles by late 2015. And when it does, drones are bound to proliferate. The FAA anticipates there could be as many as 30,000 drones hurtling through US airspace by 2020.

In other words, Texas and Idaho will be the only states that restrict civilian drone usage. Restrictions on police usage are slightly more popular in Tenn., Virginia, North Carolina, Florida, Illinois, Montana, Idaho and Oregon.