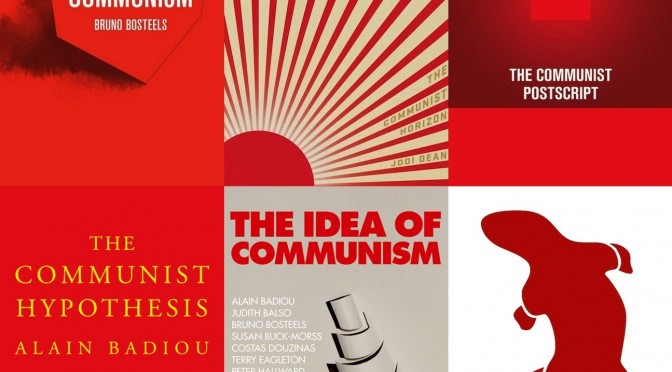 The Platypus Society has released the March issue of The Platypus Review, a special issue on Communism. It is open-access and free to read.

The issue features an interview with literary critic and Alain Badiou translator Bruno Basteels. Basteels has written books such as Marx and Freud in Latin America. Also featured is an interview with Jodi Dean, author of The Communist Horizon and Zizek’s Politics

Basteels begins by discussing “events” in May 68′ and elsewhere in Mexico before turning to the legacy of Jacques Lacan and Louis Althusser. Basteels claims that it is the denial of May 68′ as an event that led to the rejection of Althusser by his students:

It is interesting, of course, that those are the two schools that are retrospectively posited as the dominant schools. The school that was more established was of course Althusser’s; it is not accurate to say that Lacanianism was well-established as a school of thought in wider circles beyond clinical psychoanalytic work. Nevertheless, by then, Lacan may well have stood as a more sophisticated thinker of the subject than Sartre. But what is ironic is that both Althusser and Lacan were surpassed by 1968 and their followers; perhaps more thoroughly in the case of Lacan than in the case of Althusser. Both Lacan and Althusser failed to perceive any political novelty or any event at all in 1968. It is rather the old, so-called “humanist” Sartre who was capable of being in the right places at the right time, as were the Situationists, who occupy a very interesting position between these two extremes. This is why the Althusserians had to first move through a moment of ferociously critiquing Althusser, both in Rancière’s Althusser’s Lesson and in Badiou’s On Ideology.

In Dean’s interview is What is to be done with the actually-existing Marxist left?, Dean positions her work with other critical theorists:

My writing intersects Žižek as well as Hardt and Negri, with alliance to (and inspiration from) Bruno Bosteels. I get the account of communication as the fundamental aspect of economic change from Hardt and Negri. It is from them I get the account of contemporary capitalism and its political economy. I also disagree with them because they get rid of the notion of antagonism and that is the problem. Their diagnosis of informatization and communicative subsumption in capitalism is right, but they’re too positive about it, without providing the force that negativity carries in critique. I get the critical aspect from Žižek.

On the importance of the party, Žižek says, “a politics without the Party is a politics without politics.” I fully agree with that. Also, Bosteels and I have talked about the similarity between Žižek’s account of the party in the “Afterword” to Revolution at the Gates and Alain Badiou’s account in Theory of the Subject. The party is an association rooted in fidelity to an event. It holds open the space for this fidelity. The implication is that the party is not rightly understood in terms of its program or doctrine, but rather in terms of holding open the space for the subject faithful to the event, in this case, the event of 1917. This is where there is a similarity or resonance in terms of thinking about communism.

Dean goes on to make the case for Communism. She argues that leftists have begun to fetishize critique and that critique must be oriented within a Communist politics:

Communism provides a positive moment: It is something that makes you do more than criticize and constantly subject everything to a ruthless critique. It provides a purpose and a direction for that sort of negativity to have a positivity in mind. Leftist intellectuals in particular often get lost in critique. We fetishize critique. We enjoy it, in the psychoanalytic sense, but the question is: What to do with the critique or how to use it to move forward — to galvanize and organize the masses?