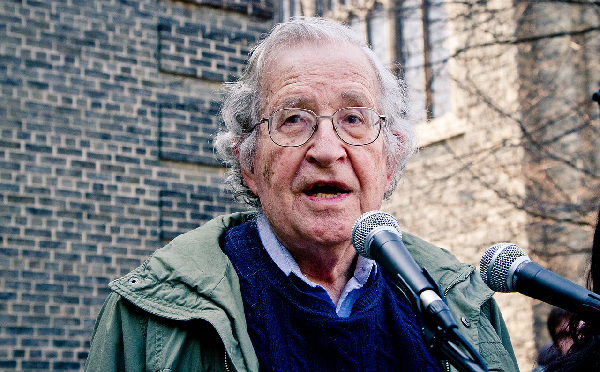 Noam Chomsky appeared in a podcast on the site Veterans Unplugged back in December 2012 to give his thoughts about American militarism. When asked by the interviewer if he thought the work of Slavoj Zizek had any relevence, Chomsky started to rail against what he considers “fancy words” that mean nothing once they are “decoded”. “Zizek is an extreme example, I don’t see anything in what he’s saying,” said Chomsky.

Chomsky then took a swipe at Jascques Lacan, the French psychoanalyst.

Jacques Lacan I actually knew. I kind of liked him. We had meetings everyone once in a while but quite frankly I thought he was a total charlatan, just posturing before the television cameras the way many Paris intellectuals do. Why this is influential I haven’t the slightest idea I dont see anything that should be influential

You can listen to the full interview at Veterans Unplugged, the convervation of Zizek and Lacan starts around 6:20.

It’s actually not the first time Chomsky has made this claim about Lacan and other postmodernists. An alleged text from Chomsky has been circulating on usenet and the web since 1995 where Chomsky calls Lacan “an amusing and perfectly self-conscious charlatan.” The interview seems to bolster the evidence that the 1995 text in fact originated from Chomsky. In the text, Chomsky speaks of his discussions with Kristeva, Foucault, and others.

Some of the people in these cults (which is what they look like to me) I’ve met: Foucault (we even have a several-hour discussion, which is in print, and spent quite a few hours in very pleasant conversation, on real issues, and using language that was perfectly comprehensible — he speaking French, me English); Lacan (who I met several times and considered an amusing and perfectly self-conscious charlatan, though his earlier work, pre-cult, was sensible and I’ve discussed it in print); Kristeva (who I met only briefly during the period when she was a fervent Maoist); and others. Many of them I haven’t met, because I am very remote from from these circles, by choice, preferring quite different and far broader ones — the kinds where I give talks, have interviews, take part in activities, write dozens of long letters every week, etc. I’ve dipped into what they write out of curiosity, but not very far, for reasons already mentioned: what I find is extremely pretentious, but on examination, a lot of it is simply illiterate, based on extraordinary misreading of texts that I know well (sometimes, that I have written), argument that is appalling in its casual lack of elementary self-criticism, lots of statements that are trivial (though dressed up in complicated verbiage) or false; and a good deal of plain gibberish. When I proceed as I do in other areas where I do not understand, I run into the problems mentioned in connection with (1) and (2) above. So that’s who I’m referring to, and why I don’t proceed very far. I can list a lot more names if it’s not obvious.