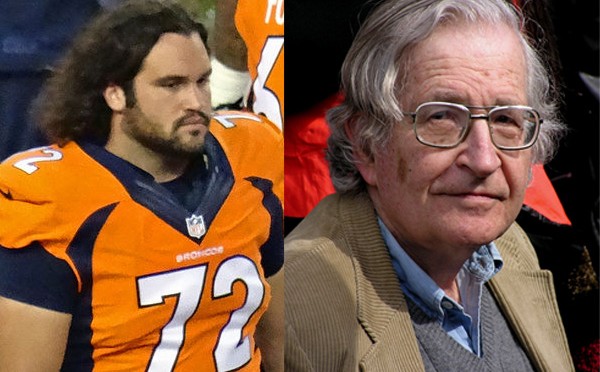 John Moffit, an American football player for the Denver Broncos, has walked away from a multi-million dollar contract after studying the works of Noam Chomsky and the Dalai Lama.

Moffit was on contract with the Denver Broncos until 2014, where he was expected to make another $1 million dollars for the remainder of his contract. Moffit announced on his Twitter that he was saying goodbye to football for good.

The AP notes that Moffit’s worldview changed after reading the works of the Dalai Lama and Chomsky over the last few years while in school.

While he played football at the University of Wisconsin, Moffit studied sociology. He hopes to become a public figure in philosophy and politics. The AP reports:

Moffitt said he’s looking forward to speaking his mind on the radio and in podcasts he’s going to produce. He said he has plenty of opinions to share on everything from philosophy to politics, although he has less to say about sports.

Noam Chomsky could not be reached for comment (because we didn’t try), but would most likely support Moffit’s decision. The linguist/anarchist has talked in the past about the role sports play in manufacturing consent in society. Back in 1992, Chomsky noted that sports fandom is

…a way of building up irrational attitudes of submission to authority, and group cohesion behind leadership elements — in fact, it’s training in irrational jingoism. That’s also a feature of competitive sports. I think if you look closely at these things, I think, typically, they do have functions, and that’s why energy is devoted to supporting them and creating a basis for them and advertisers are willing to pay for them and so on.