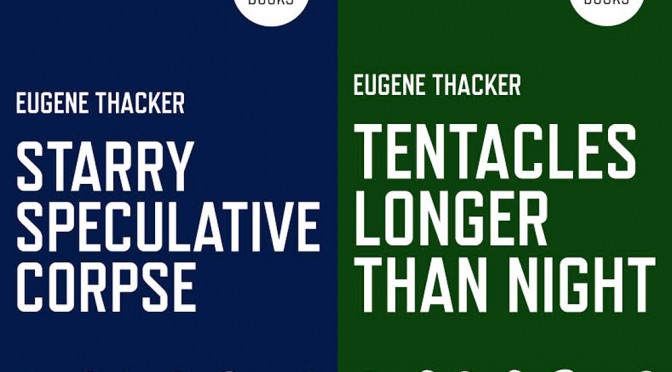 Eugene Thacker’s second book in his series on “Horror and Philosophy” is the topic of discussion on the most recent episode of the Zero Squared podcast.

The first book in the series entitled “In the Dust of this Planet” caught on in a somewhat strange way last year as the book’s cover was appropriated by a fashion line, ended up on the back of Jay Z’s leather jacket in a music video, and quite upset Glenn Beck. After spotting Jay Z’s jacket, Beck apparently read the book and found Thacker’s treatise on nihilism and horror to be yet another sign of the decline of Western Civilization. Thacker’s book fell somewhere between Miley Cyrus and the Obama administration on Beck’s scale of decadence and decline while Horror writer and misanthrope Thomas Ligotti heaped praise on it.

Thacker’s discourse on the intersection of horror and philosophy is utterly original and utterly captivating…In the Dust of This Planet is an encyclopedic grimoire instructing us in the varieties of esoteric thought and infernal diversions that exist for the reader’s further investigation, treating us to a delightful stroll down a midway of accursed attractions that alone are worth the ticket of this volume.