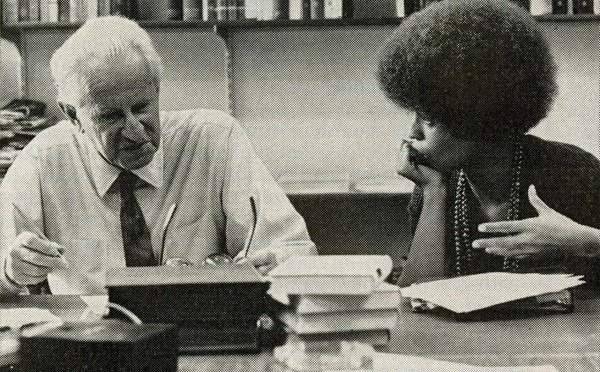 Herbert Marcuse and Theodor Adorno were two intellectual power houses associated with the Frankfurt School. Adorno’s book with Max Horkheimer, “The Dialectics of Enlightenment,” explored the new forms of domination associated with liberal capitalism and the 20th century. Marcuse’s “One-Dimensional Man” argues that history, thought and society have become “one-dimensional” through its technological rationality and is constantly destroying the possibility for its critique.

For people unfamiliar with the history of the Frankfurt School, then, it may come as a surprise that Adorno and Marcuse were bitterly divided about the emerging student movements in the late 1960s. The eruption of student protest during May ’68 in France was met with similar movements in the US, Italy, Germany and elsewhere.

May ’68 and its associated uprisings against capitalism were not generally met with widespread support from Marxist professors, who could finally see theory put into praxis, as one might expect. In France, Marxists like Louis Althusser bitterly argued with the student movements about towing the Communist Party line, which many rejected. In Germany, Adorno and Habermas were highly critical of the student movements, alleging that they would easily collapse into a kind of left fascism.

This conflict with student movements did, however, spawn a new generation of radical thinkers who harbored a distrust for the “old guard” of Marxist academia. Jacques Ranciere wrote “Althusser’s Lesson” to criticize Althusser’s and other Marxist’s actions during the events of May ’68. Marcuse, while in America, mentored radical activists like Angela Davis and argued with with Adorno about the merits of the student movement.

Now, in this (albeit old) set of letters between Marcuse and Adorno from 1969, readers can get an inside glimpse of their argument. The PDF of the letters was found on the Trinketization blog.

They center around Adorno’s initial letter to Marcuse, where he complains about students from the SDS (Socialist German Student Union) who occupied a room at the Institute for Social Research.  Adorno had called the police, who treated the students “much more leniently” than the students allegedly treated Adorno. Marcuse responds, chastising Adorno for calling the police if his life was not in danger. Adorno later complains of getting “another dose of tear gas” in a class, related to the student activism.

In the letters,  Adorno refers to the barbaric behavior on the part of the students. Aside from drawing the hatred of many activists students during this time, Adorno was also subject to an incident that year where female students had exposed their breasts to him and showered flower petals on him after “If Adorno is left in peace, capitalism will never cease” was written on the blackboard. Though Adorno does not explicitly mention that incident in the letters, it’s likely that it was one of the many horrors he complains of to Marcuse. Adorno, in the letters, criticizes “the barbaric inhumanity of a mode of behaviour that is regressive and even confuses regression with revolution ” and notes that the word “professor” is now used condescendingly to “dismiss people” in Berlin. He says to Marcuse, “I take much more seriously than you the danger of the student movement flipping over into fascism.”