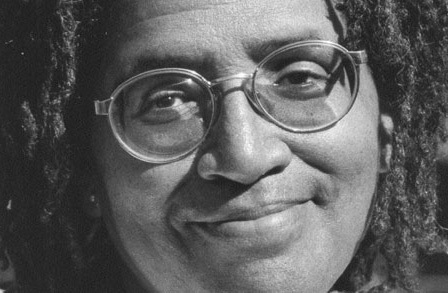 Audre Lorde (February 18, 1934 – November 17, 1992) would have turned 79 today. The poet and activist was an outspoken critic of feminism’s focus on white, middle-class, heterosexual women by invoking the intersections of race, class, gender and sexuality (before it was cool).

Her legacy has been cemented by the The Audre Lord Project, an eponymous community organizing network for Lesbian, Gay, Bisexual, Two Spirit, Trans and Gender Non Conforming People of Color.

Below Lorde argues in her seminal essay “The Master’s Tools Will Never Dismantle the Master’s House” argues against white feminist academics who are unwilling to cope with the fact “that the women who clean your houses and tend your children while you attend conferences on feministtheory are, for the most part, poor women and women of Color.”

Read the entire essay below:

I agreed to take part in a New York University Institute for the Humanities
conference a year ago, with the understanding that I would be commenting
upon papers dealing with the role of difference within the lives of American
women: difference of race, sexuality, class, and age. The absence of these
considerations weakens any feminist discussion of the personal and the
political.

It is a particular academic arrogance to assume any discussion of feminist
theory without examining our many differences, and without a significant
input from poor women, Black and Third World women, and lesbians. And yet, I
stand here as a Black lesbian feminist, having been invited to comment
within the only panel at this conference where the input of Black feminists
and lesbians is represented. What this says about the vision of this
conference is sad, in a country where racism, sexism, and homophobia are
inseparable. To read this program is to assume that lesbian and Black women
have nothing to say about existentialism, the erotic, women’s culture and
silence, developing feminist theory, or heterosexuality and power. And what
does it mean in personal and political terms when even the two Black women
who did present here were literally found at the last hour? What does it
mean when the tools of a racist patriarchy are used to examine the fruits of
that same patriarchy? It means that only the most narrow perimeters of
change are possible and allowable.

The absence of any consideration of lesbian consciousness or the
consciousness of Third World women leaves a serious gap within this
conference and within the papers presented here. For example, in a paper on
material relationships between women, I was conscious of an either/or model
of nurturing which totally dismissed my knowledge as a Black lesbian. In
this paper there was no examination of mutuality between women, no systems
of shared support, no interdependence as exists between lesbians and
women-identified women. Yet it is only in the patriarchal model of
nurturance that women “who attempt to emancipate themselves pay perhaps too
high a price for the results,” as this paper states.

For women, the need and desire to nurture each other is not pathological but
redemptive, and it is within that knowledge that our real power is
rediscovered. It is this real connection which is so feared by a patriarchal
world. Only within a patriarchal structure is maternity the only social
power open to women.

Interdependency between women is the way to a freedom which allows the I to
be, not in order to be used, but in order to be creative. This is a
difference between the passive be and the active being.

Advocating the mere tolerance of difference between women is the grossest
reformism. It is a total denial of the creative function of difference in
our lives. Difference must be not merely tolerated, but seen as a fund of
necessary polarities between which our creativity can spark like a
dialectic. Only then does the necessity for interdependency become
unthreatening. Only within that interdependency of different strengths,
acknowledged and equal, can the power to seek new ways of being in the world
generate, as well as the courage and sustenance to act where there are no
charters.

Within the interdependence of mutual (nondominant) differences lies that
security which enables us to descend into the chaos of knowledge and return
with true visions of our future, along with the concomitant power to effect
those changes which can bring that future into being. Difference is that raw
and powerful connection from which our personal power is forged.

As women, we have been taught either to ignore our differences, or to view
them as causes for separation and suspicion rather than as forces for
change. Without community there is no liberation, only the most vulnerable
and temporary armistice between an individual and her oppression. But
community must not mean a shedding of our differences, nor the pathetic
pretense that these differences do not exist.

Those of us who stand outside the circle of this society’s definition of
acceptable women; those of us who have been forged in the crucibles of
difference — those of us who are poor, who are lesbians, who are Black, who
are older — know that survival is not an academic skill. It is learning how
to stand alone, unpopular and sometimes reviled, and how to make common
cause with those others identified as outside the structures in order to
define and seek a world in which we can all flourish. It is learning how to
take our differences and make them strengths. For the master’s tools will
never dismantle the master’s house. They may allow us temporarily to beat
him at his own game, but they will never enable us to bring about genuine
change. And this fact is only threatening to those women who still define
the master’s house as their only source of support.

Poor women and women of Color know there is a difference between the daily
manifestations of marital slavery and prostitution because it is our
daughters who line 42nd Street. If white American feminist theory need not
deal with the differences between us, and the resulting difference in our
oppressions, then how do you deal with the fact that the women who clean
your houses and tend your children while you attend conferences on feminist
theory are, for the most part, poor women and women of Color? What is the
theory behind racist feminism?

In a world of possibility for us all, our personal visions help lay the
groundwork for political action. The failure of academic feminists to
recognize difference as a crucial strength is a failure to reach beyond the
first patriarchal lesson. In our world, divide and conquer must become
define and empower.

Why weren’t other women of Color found to participate in this conference?
Why were two phone calls to me considered a consultation? Am I the only
possible source of names of Black feminists? And although the Black
panelist’s paper ends on an important and powerful connection of love
between women, what about interracial cooperation between feminists who
don’t love each other?

In academic feminist circles, the answer to these questions is often, “We
did not know who to ask.” But that is the same evasion of responsibility,
the same cop-out, that keeps Black women’s art out of women’s exhibitions,
Black women’s work out of most feminist publications except for the
occasional “Special Third World Women’s Issue,” and Black women’s texts off
your reading lists. But as Adrienne Rich pointed out in a recent talk, white
feminists have educated themselves about such an enormous amount over the
past ten years, how come you haven’t also educated yourselves about Black
women and the differences between us — white and Black — when it is key to
our survival as a movement?

Women of today are still being called upon to stretch across the gap of male
ignorance and to educate men as to our existence and our needs. This is an
old and primary tool of all oppressors to keep the oppressed occupied with
the master’s concerns. Now we hear that it is the task of women of Color to
educate white women — in the face of tremendous resistance — as to our
existence, our differences, our relative roles in our joint survival. This
is a diversion of energies and a tragic repetition of racist patriarchal
thought.

Simone de Beauvoir once said: “It is in the knowledge of the genuine
conditions of our lives that we must draw our strength to live and our
reasons for acting.”

Racism and homophobia are real conditions of all our lives in this place and
time. I urge each one of us here to reach down into that deep place of
knowledge inside herself and touch that terror and loathing of any
difference that lives there. See whose face it wears. Then the personal as
the political can begin to illuminate all our choices.