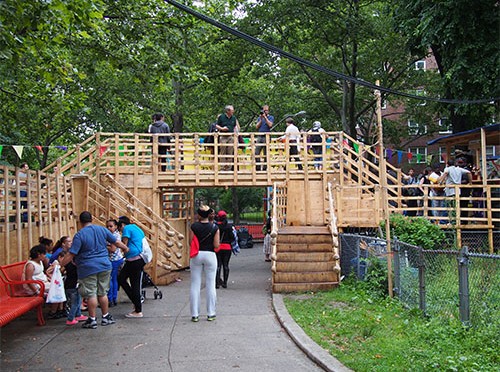 Have you ever walked through a public housing complex and exclaimed, “Geez, after all the years of city neglect, rampant mold, bedbugs, and a gross indifference to the gaping hole in my ceiling, we could really use a monument to some long-dead Marxist.”

That’s pretty much what Swiss artist Thomas Hirschhorn said when he showed up to New York City, sat in on a bunch of public housing resident meetings, and decided to set up shop at the Forest Houses in the Bronx to build a monument to Antonio Gramsci. Gramsi was an Italian Marxist who is most famous for his writings in the “Prison Notebooks.”

Handmade from plywood, plexiglass and miles of beige packing tape — one of Mr. Hirschhorn’s signature art supplies — the Gramsci Monument bears no resemblance whatsoever to the cenotaphs and glowering statues that dot the rest of New York. And it doesn’t look much like an artwork, either. It looks more, in fact, like an adult treehouse or a makeshift beach cabana or a chunk of set hijacked from the Kevin Costner film “Waterworld.”

While I was initially critical of some fancy-pants artists coming into a low-income community and paying its resident a measley $12 an hour to build a monument under an artist they’ve never heard, the monument does provide a public space for community members to come, interact and host cultural events. So evil gentrification? Maybe. Awesome community building project? Also maybe.

The monument is temporary, and will be up for 3 months.

Hirschhorn has previously made monuments of Deleuze, Spinoza, and Batailles.

You can learn more about the monument on its hideous burns-your-eyes website.