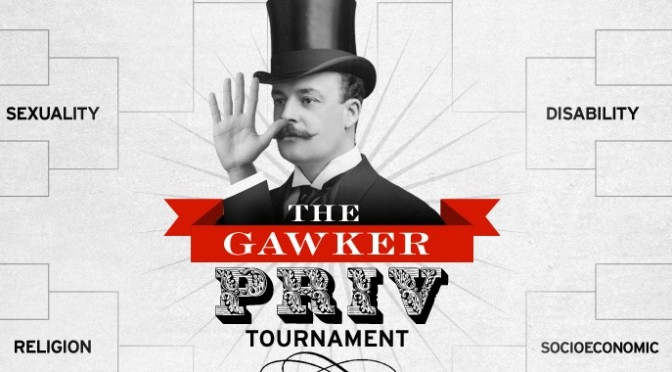 All good branches of thought have their ad absurdum moment where, following an otherwise sound logic, thinkers are brought to obscene conclusions that legitimate straw arguments against the field as a whole.

For instance, Marxists claiming that not being sexist is a distraction from the revolution, or shitty 2nd wave feminists who claim that trans-women are part of a larger misogynist plot to invade women-only spaces. And of course, the whole host of Tumblr academics who are trying to play the oppression olympics.

The oppression olympics takes a wide array of awesome scholarship about the oppression of non-white, non-heterosexual, non-male, differently abled (and usually poor) folks and takes sides. For example, rather than just admit that oppressions usually piggy-back off each other intersectionally, they insist that one oppression is the foundation for all other oppressions. But which one?

Gawker, possibly in a move of pure-genius trolling, has decided to settle the oppression olympics once and for all. Democratically, of course.

Officially named “The Privilege Tournament,” the oppression olympics has set up a racket divided into multiple axes of oppression: Race, sexuality, religion, physique, gender, disability, socioeconomic and allergies (seriously, Gawker?). Users vote on who has less privilege in each match-up. So what are the results so far?

70% agree that intersex people are less privileged than cis-gendered males (born as men, live as men). The question remains,  the fuck is wrong with the other 30%? Being a man is so hard, I have to hold the door open for women and have complete control over my reproductive health!

Check out the results, and participate, at Gawker.