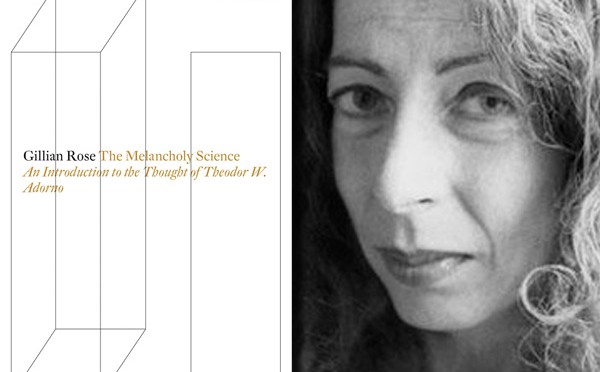 This excerpt is from “The Melancholy Science” by Gillian Rose, in a chapter entitled “The Search for Style.”

The Melancholy Science is Gillian Rose’s investigation into Theodor Adorno’s work and legacy. Rose uncovers the unity discernable among the many fragments of Adorno’s oeuvre, and argues that his influence has been to turn Marxism into a search for style. The attempts of Adorno, Lukács and Benjamin to develop a Marxist theory of culture centred on the concept of reification are contrasted, and the ways in which the concept of reification has come to be misused are exposed. Adorno’s continuation for his own time of the Marxist critique of philosophy is traced through his writings on Hegel, Kierkegaard, Husserl and Heidegger. His opposition to the separation of philosophy and sociology is shown by examination of his critique of Durkheim and Weber, and of his contributions to the dispute over positivism, his critique of empirical social research and his own empirical sociology.

Gillian Rose shows Adorno’s most important contribution to be his founding of a Marxist aesthetic that offers a sociology of culture, as demonstrated in his essays on Kafka, Mann, Beckett, Brecht and Schönberg. Finally, Adorno’s ‘Melancholy Science’ is revealed to offer a ‘sociology of illusion’ that rivals both structural Marxism and phenomenological sociology as well as the subsequent work of the Frankfurt School.

The book has recently be re-released as part of Verso’s Radical Thinker Series set 8.

You can enter to win this book and others as part of our Radical Thinkers giveaway.