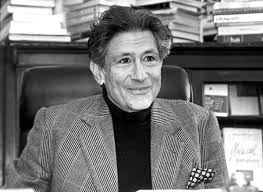 Najla Said recently took to the pages of Salon to recount her childhood in New York City with her famed postcolonialist father. Edward Said, Najla’s father, is most recognized for his book  “Orientalism” which elucidates the systemic depiction of the “Orient” in demeaning, racist ways in Western thought.

Najla notes that, despite her upbringing, defending her “non-Western” culture and family was an uphill battle growing up in New York City in the 80s and 90s.

After years of trying desperately to convince people that they didn’t really understand me or the place my family came from, I stopped trying, especially since there was never anyone around to make me feel less alone in my assertions. I resigned myself to believing that everything people said about my culture was true, because it was exhausting and futile to try to convince anyone otherwise. Strangely, though, I also held on tightly to what I knew to be accurate and real about my family and culture. My parents and extended family are entirely responsible for that.

Najla continues to recount being originally confused by her father’s theory.

As he explained once, when I pressed him to put it into simple English: “The basic concept, is that . . . historically, through literature and art, the ‘East,’ as seen through a Western lens, becomes distorted and degraded so that anything ‘other’ than what we Westerners recognize as familiar is not just exotic, mysterious, and sensual but also inherently inferior.”

And this humorous anecdote:

To very smart people who study a lot, Edward Said is the “father of postcolonial studies” or, as he told me once when he insisted I was wasting my college education by taking a course on postmodernism and I told him he didn’t even know what it was:

I still don’t know if he was joking or serious.

Read the full article at Salon.