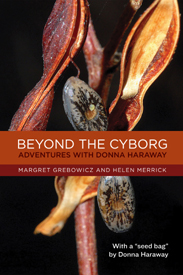 All too often, the work of Donna Haraway is reduced to her writing in “The Cyborg Manifesto.” And while that work offers a great deal of insight into the importance of breaking down essentialized identities through the figure of the cyborg, it often eclipses the rest of Haraway’s important theoeretical contributions.

“Beyond the Cyborg: Adventures with Donna Haraway” surveys Haraway’s collected works, and proves that Haraway’s thought is as relevant as ever. Citing the tendency of the cyborg to overshadow “other crucial aspects of Haraway’s work,” the authors, Margret Grebowicz and Helen Merrick, set out to unsettle the notion that the cyborg is Haraway’s most important contribution to critical theory.

They do so by exploring, chapter by chapter, Haraway’s contributions to “natures”, “knowledges,” “politics,” “ethics” and “stories.”

Haraway, rather than an outright rejection, believes in constantly engaging with the life sciences, understanding that discourses surrounding nature, medicalization and bodies also structures the way power operates on those bodies. As such, she has struggled in “queering what counts as nature.”

Although Haraway is rarely classified as an ecofeminist, at the heart of her work is the problem of how we craft more ethical, liveable lives for all human and nonhuman organisms, which requires constantly critical taking to task of the devastating machines of colonialism, capitalism, and patriarchy.

In this way, we may understand that:

Nature is a slippery figuration that is called upon to perform a multitude of differing political, activist, theoretical, philosophical, representational and scientific work. It can function at once as supposedly transparent descriptions of the world-as-it-is (or was), serve as justification for normalized patterns of behavior, forms and organization and as signifier for that which is somehow outside culture. The human knower of this nature sits in a complex and contradictory relation to this series of meanings: at once both part of nature (the organic) and what is natural (god- or biology-ordained),but also apparently separate from it as the purveyor and originator of culture and discourse (the not-animal). Our definitions and codifications of nature are complexly intertwined with the ways we define human and how/why/when we separate the human from the nonhuman.

It should be of no surprise then, that the following chapters work heavily off of Haraway’s critical framework of nature. Her politics and ethics seeks to resolve the problem of the non-human. In “Knowledge,” Grebowicz and Merrick argue that these theoretical frameworks are crucial for better forms of science and historiography. In the case of primatology, genetics, embryology, for instance, questioning the implicit gender assumptions has lead to more scientifically rigorous models.

In the case of science fiction, Haraway sees a genre ripe for re-imagining worlds in a politically productive way.  Haraway, and by extension Grebowicz and Merrick, are interested in a growing body of feminist science fiction.  Haraway writes about the work of Octavia Butler (not to be confused with Judith). Haraway calls upon Butler’s work “Dawn”  to “challenge  the power of biomedical discourses of immunology.” “In opposition to the trend in biomedical discourse to constitute individuals through the exclusion of everything that is ‘not self’ and that ‘elicits a defense reaction if boundaries are crossed,’ Haraway’s aim is to ‘make problematic just what does count as self, within the discourse of biology and medicine.” Butler’s fiction makes clear the fantasy of the “perfection of the fully defended, ‘victourious’ self.”

I say this a lot, but this book is both accessible and makes for a good intro into the work of Donna Haraway. As someone largely unfamiliar with Haraway’s work, “Beyond the Cyborg” offers an illuminating survey of Haraway theoretical contributions to theory and science. At times, it feels rushed (most likely for the sake of covering such an expansive body of work), but will no doubt be an invaluable tool for student’s wishing to further explore Haraway’s work.