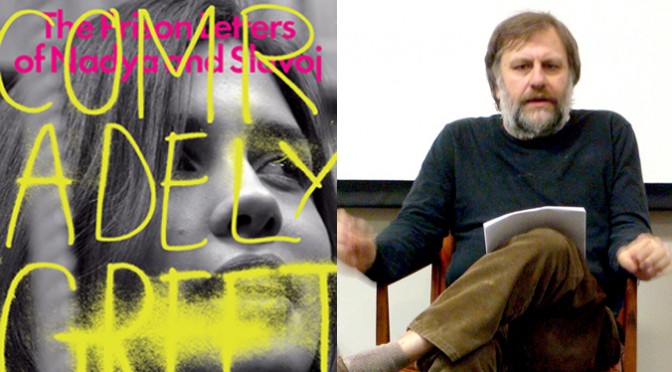 In August 2012, Nadya Tolokonnikova of punk-protest band Pussy Riot was sentenced to jail over charges of “hooliganism” for staging a protest in a Russian Orthodox church in which they sang, danced, and urged the Virgin Mary to get rid of Vladimir Putin and become a feminist.

During her time in prison, which lasted a little over a year despite international protest, Nadya engaged in a thought-provoking exchange of letters with Slovenian theorist Slavoj Zizek on capitalism, philosophy and prison.

Poking fun at Slavoj Zizek’s crotchety demeanor is one of the favorite pastimes here on Critical-Theory, but I’ve always wondered if beneath the misunderstood, disheveled ogre there was in fact, a caring Shrek waiting to be uncovered.

And, well, it might be true. The amazing exchange of letter,s compiled in the forthcoming “Comradely Greetings,” sheds light on the philosophy that backs Nadya’s activism in addition to humanizing a philosopher that is well-known for his public displays of misanthropy. In other words, I’d like to posit here that Zizek might secretly be a really nice guy.

In the letter below, Zizek sends what would become his  first in an exchange of letters that would span from August 2012 to March 2014 with Nadya Tolokonnikova. Dated August 26, 2012, the letter was written 2 months after Nadya and her band mates were formally charged in Russia for their “Punk Prayer” protest.

“Dear Nadezhda, dear Maria, dear all of you!

I got your letters in Russian, which I can read (I learned Russian in high school!). Unfortunately, I cannot any longer write in Russian, so forgive me my English.

I cannot tell you how proud I am to be in contact with you. Your acts are well thought, and based on deep insights into how oppressive power works, how it has to rely on a hidden obscene agenda, violating its own rules. But more than that, you show all of us the way to combine these right insights with simple courage. Against all postmodern cynics, you demonstrate that ethical-political engagement is needed more than ever. So please ignore enemies and false friends who pity you as punk provocateurs who deserve mere clemency. You are not helpless victims calling for sympathy and mercy, you are fighters calling for solidarity in struggle. From my own past in Slovenia, I am well aware of how punk performances are much more effective than liberal humanitarian protests. My dream is, when all this mess is over, to have a long talk with you about all these matters.

But I am well aware that we are fragile human beings at the mercy of forces of oppression, and this is why I am also filled with sad rage and fury—why can I not do more to help you? Please just let me know how I can be of ANY help and I will do it, be it political or personal. Next week I go to Toronto to present the new film The Pervert’s Guide to Ideology, and I will dedicate it to you.

The story of how this exchange came to be is as interesting as the letters themselves. While in provisional detention in Moscow, Nadya explained the politics behind the Pussy Riot protest by citing Socrates, Diogenes, and mentioned she was currently reading “Violence” by Slavoj Zizek and would love to meet him. Michel Eltchaninoff, who writes the introduction for “Comradely Greetings,” promptly wrote Zizek to arrange a meeting. Realizing a physical meeting was likely impossible, a letter exchange was arranged. Zizek’s letters, written in English, were translated in Russian, and Nadya’s letters, written in Russian, were translated into English. The letters, of course, were all monitored by Russian prison officials.

The letter exchange between Nadya and Zizek are fascinating for a few reasons. First, Nadya is a brilliant philosophy student who manages to spar with one of academia’s most well-read theorists. Second, Zizek comes off as a truly genuine and caring person.

After a rather lengthy letter, he concludes,

“But, my dear Nadya, I feel a certain sense of guilt in writing these lines: who am I to explode in such narcissistic theoretical outbursts when you, as a concrete individual, are exposed to very real empirical deprivations.”

In the response below, Nadya notes “Don’t waste your time worrying about giving in to theoretical fabrications while I supposedly suffer ’empirical deprivations.'” (Note – a shorter version of this article had previously appeared in The Guardian).

The note, entitled “I Write You From a Special Economic Zone,” Nadya takes issue with the idea that modern capitalism is “loose,” “erratic,” and non-hierarchical, noting that she is among the many who continue to be exploited in these hierarchical structures. Nadya’s prison was functionally a forced labor camp, where she elsewhere notes people regularly work 16-hour days.

You really think “today’s capitalism has already overcome the logic of totalizing normality”? I say maybe it hasn’t— maybe it just really wants us to believe it has, to accept that hierarchization and normalization have been exceeded. You mention places where the legal rights that limit exploitation are suspended in the name of the world capitalist order. At this very moment, I write you from a Special Economic Zone. Seeing it with my eyes, feeling it on my skin.

As a kid I wanted to work in advertising. I had a whole romance with it. So now I know how to evaluate advertisements and commercials. I get the finer points. I even appreciate the things that by definition they have to keep silent about.

Late capitalism’s anti-hierarchic and rhizomatic posture amounts to good advertising. You and Brian Massumi are right to point out that capitalism today has to appear loose, even erratic. That’s how it captures affect—the affect of the consumer. When it comes to manufacturers (especially the ones who aren’t located in high-tech business parks) this ‘velvet’ capitalism can afford to change its stripes. But the logic of totalizing normality still has to continue its work in those places whose industrial bases are used to shore up everything dynamic, adaptable, and incipient in late capitalism. And here, in this other world hidden from view, the governing logic is one of absolutely rigid standards, of stability reinforced with steel. Erratic behavior is not tolerated from workers here; homogeneity and stagnation rule. No wonder authoritarian China has emerged as a world economic leader.

Modern capitalism has a deep interest in seeing that you and I believe the system runs completely on principles of free creativity, limitless growth, and diversity, and that the flip side—millions of people enslaved by all-powerful and (take it from me) fantastically stable standards of production— remains invisible. We have an interest in exposing this deception, which is why I insist on unmasking the static, centralized, hierarchic basis of what advertising will later sanctify as a product of unbridled creativity alone.

That’s why I take exception to your distrust of thinking that is posited within the frameworks of binary oppositions, and even insist on the use of such binaries as a heuristic—one that is situational and, when it must be, even burlesque. This is exactly how I deploy the opposition between Apollonian equilibrium and Dionysian flux. And given the broad expansion of fundamentalist tendencies in politics and economics, I’m sure we can’t yet write off the suggestion of militant workers that economic growth and ecological conservation must be antithetical.

With regard to the techniques that the global economy’s intellectual and ad-industry core has developed for escaping static identities of subjugation, my feeling is that we need to find a way of joining this game without checking our beliefs at the door. We can definitely profit from the ping-pong being played between an egalitarian-emancipatory “deterritorialization” and the postmodern, capitalist one. But we have to stay brave, energetic, and stubborn—we can’t walk away from the fight. Sparring is how you build endurance, how you learn to be quick on your feet and develop a sense of humor. Unlike the old Left, we can’t just reject capitalism out of hand—we’ll get further by playing with it, teasing till it’s been perverted. Perverted, I mean, in the sense of being turned to face us, enlisted into our cause.

With regard to the techniques that the global economy’s intellectual and ad-industry core has developed for escaping static identities of subjugation, my feeling is that we need to find a way of joining this game without checking our beliefs at the door. We can definitely profit from the ping-pong being played between an egalitarian-emancipatory “deterritorialization” and the postmodern, capitalist one. But we have to stay brave, energetic, and stubborn—we can’t walk away from the fight. Sparring is how you build endurance, how you learn to be quick on your feet and develop a sense of humor. Unlike the old Left, we can’t just reject capitalism out of hand—we’ll get further by playing with it, teasing till it’s been perverted. Perverted, I mean, in the sense of being turned to face us, enlisted into our cause.

Don’t waste your time worrying about giving in to theoretical fabrications while I supposedly suffer “empirical deprivations.” There’s value to me in these inviolable limits, in my being tested this way. I’m fascinated to see how I’ll cope with all this, how I’ll channel it into something productive for my comrades and myself. I’m finding inspiration in here, ways of evolving. Not because but in spite of the system. Your thoughts and anecdotes are a help to me as I negotiate this conundrum. I’m glad we ’re in touch.

I await your reply.

Wishing you luck in our common cause,

Zizek, in his response, offers a profuse apology:

“You wrote: ‘Don’t waste your time worrying about giving in to theoretical fabrications while I supposedly suffer ‘empirical deprivations.” This simple sentence made me aware of the falsity of the final turn in my last letter: my expression of sympathy with your plight basically meant, ‘I have the privilege of doing real theory and teaching you about it while you are basically good for reporting on your experiences of hardship’… Your last letter abundantly demonstrates that you are much more.”

And, perhaps in one of my favorite lines (from the same response),

“I am myself so tired of the purist pseudo-Marxist critique of advertising as part of commodity fetishism that I am almost tempted to propose the following guideline: a critical social theorist who is not able to enjoy advertisements should not be taken seriously”

In a later response dated March 11, Nadya informs Zizek that she has now been freed, and has begun trying to organize female prisoners by creating a group called “Zona Prava (Zone of Rights).

“In due time, we and Zona Prava will have to answer an
old question: can the—pardon me—subaltern speak? How
can sister-inmates develop their own language, existing
alongside the official one spoken by prison administrators?
How can they draw up the map to another world, a world
different than that of the administrators? The story of the
subject’s development in prison is extremely meaningful.”

“Let me first express my joy,” Zizek writes in a final letter, “I am glad that you are now free, and even more glad that your struggle goes on. You have, of course, my full solidarity with Zona Prava.”

“Comradely Greetings” will be released in September, 2014 by Verso Books.