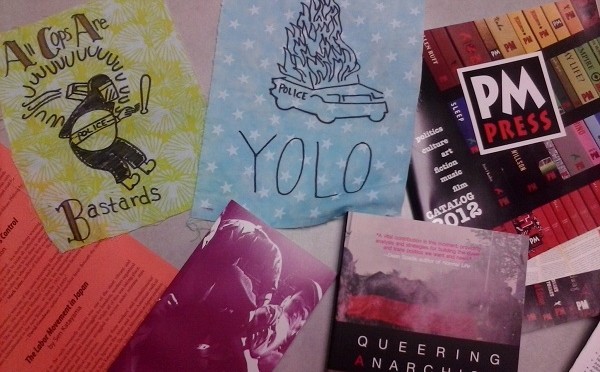 The NYC Anarchist Book Fair, a yearly book fair dedicated to, you guessed it, anarchist books, came to the Lower East Side’s Clemente Soto Velez Cultural Center on today, April 6. The fair will run until tomorrow April 7, so anyone in the area should stop by. But you don’t need to live in a gentrification palace in Williamsburg to check out some of the great offerings from the fair-goers. Here are some of the book publishers that caught our eye.

AK Press is a collectively run and owned publisher that’s been operating since 1990. They also have an open submission process for their books and will help other small publishers with distribution. They’ve published books like Queering Anarchism: Addressing and Undressing Power and Desire

We’re small: a dozen people who work long hours for short money, because we believe in what we do. We’re anarchists, which is reflected both in the books we provide and in the way we organize our business. Decisions at AK Press are made collectively, from what we publish, to what we distribute and how we structure our labor. All the work, from sweeping floors to answering phones, is shared. When the telemarketers call and ask, “who’s in charge?” the answer is: everyone. Our goal isn’t profit (although we do have to pay the rent).

Probably the least critical of the list, OR Books are still worth a shot. Run by former Verso managing director Colin Robinson and John Oakes, OR seeks to eliminate waste by printing books on demand straight to consumers and providing ebooks on platforms like Amazon. Their catalogue includes the works of Norm Finkelstein and a host of books on the Occupy Movement and the Arab Spring.

On Our Own Authority! Publishing

OOOA (greatest acronym ever) is a little under a year old and based in Atlanta, Georgia.

On Our Own Authority! Publishing (OooA!) is an emerging autonomous research press based in Atlanta, Georgia. Specializing in anarchist and radical literature, we plan to publish intellectual and social movement history, and studies of global political thought.

They released some new titles for the Anarchist Book Fair including The Commune: Paris, 1871

and The Labor Movement in Japan

Seven Stories Publishers are located in NYC and aside from their catalog they offer some handy-dandy free reader’s guides.

Founded in 1995 in New York City and named for the seven authors who committed to a home with a fiercely independent spirit, Seven Stories Press publishes works of the imagination and political titles by voices of conscience. While most widely known for its books on politics, human rights, and social and economic justice, Seven Stories continues to champion literature, with a list encompassing both innovative debut novels and National Book Award–winning poetry collections, as well as prose and poetry translations from the French, Spanish, German, Swedish, Italian, Greek, Polish, Korean, Vietnamese, Russian, and Arabic.

They’ve published works such as Are Prisons Obsolete? by Angela Davis and a host of Howard Zinn titles.